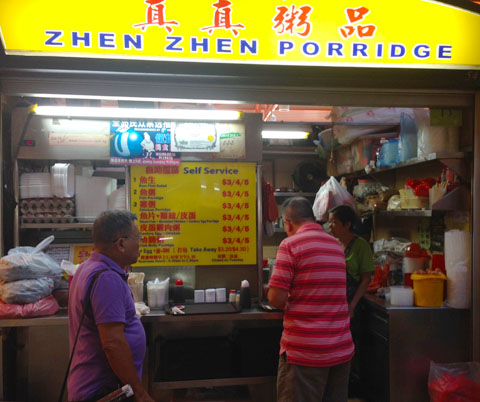 So here’s the thing. I’m not actually a fan of porridge.

And by the way, in Singapore, porridge is not actually porridge. Singaporeans call rice congee “porridge”. So if you’re a foreigner, don’t be too alarmed if you order porridge thinking you’re going to get porridge, and you end up with rice congee instead 😉

I do like rice porridge Teochew style (where you eat it mainly because of the HUGE variety of side dishes that accompany it), but the Cantonese style (where it’s basically a bowl of mush and not much else) – not so much. I will definitely eat it, but it’s not something I go out of my way for. Mostly because – hello – we live in such horrid humidity and heat, WHY would anyone want to put boiling hot and sticky slop into themselves and make themselves feel even hotter?? 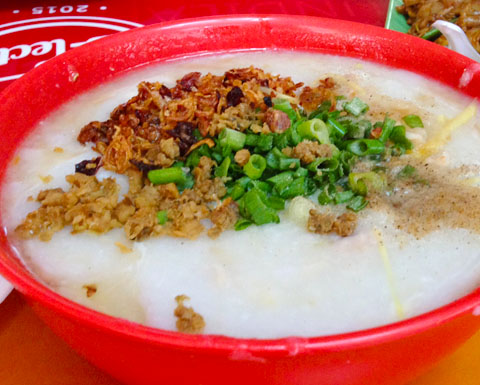 But since a friend was visiting from Germany and we found ourselves at Maxwell Food Centre one afternoon, I figured we should check it out since it had crazy online raves!

It was only about 10AM on a weekday, and yet there was already a queue there. I shudder to think of the madness during lunch time.

This is the $4 bowl. It’s actually pretty big, and the smaller $3 option is probably a better bet for one person’s lunch. The rice porridge comes steaming hot and is silky-to-the-max. If you like ooey gooey rich and thick porridge, this is a winner. The grains of rice have been boiled for so long that it’s basically disintegrated, resulting in a really smooth texture. It is not too salted, and probably will be a major hit with kids.

The ingredients and condiments are generous, to say the least. In fact, I’d have preferred less ingredients in there, because I just wanted to enjoy the plain porridge! I also got one raw egg cracked in the bottom, which lends a super sweet tastes to the porridge when stirred and cooked in. Yum.

Only downside? They add ginger strips in here. LOTS of ginger strips. I hate ginger so I was cringing with every mouthful, trying desperately to avoid the evil stuff. Just something to note if you’re a fellow ginger hater  – ask them to omit it! 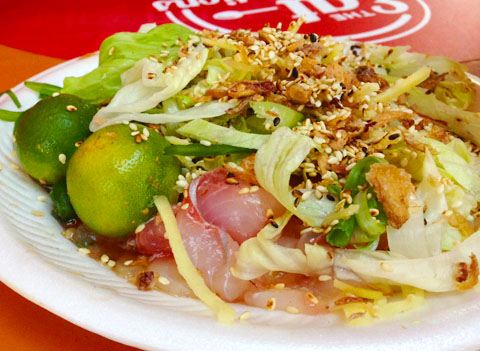 This is the raw fish salad, which can be ordered as a side. You squeeze the lime over the slices of raw fish to marinate them, then dunk it into the piping hot porridge. It’s awesome.

I didn’t get all the lettuce and random bits and bobs on top, though. Are you supposed to dunk everything into the porridge? Or just the raw fish slices, and the rest you eat as-is – like a salad??

I’d recommend getting this raw fish salad, to dunk the fish into your porridge. It adds flavour and is incredibly tender. So good! 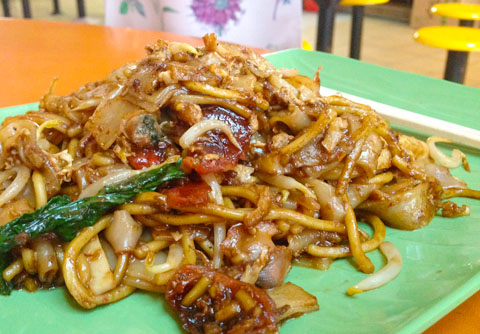 We got a plate of char kway teow (ie. fried rice noodles) as well, from a stall I don’t remember. It was a winner! Beautifully oily, with lots of lup cheong (ie. Chinese sausage) and cockles studded through it. Addictive 🙂