Hunter, HUNTER, CARTER & CHLOE KIDS AND THINGS STUFFED IN ORIFICES – what you need to know 7 November 2014

Yesterday, we had a BIG SCARE with Hunter (3.5 years old) – which was both hilarious and scary.

The crazy kid stuffed a plastic googly eye all the way up his nose!


So the story was, I was strapping Carter into the car whilst Hunter was climbing up into his car seat.

“Oooh! I have a googly eye!”, said he. It’s one of those puffy plastic discs with a black ‘eyeball’ in the middle – commonly used in kids art and craft projects.

“That’s nice”, I said, not bothered at all because both my kids have – from birth – never placed a foreign object in any orifice. They just weren’t the kind of babies that mouthed stuff and picked stuff off the ground to put in their mouths! So I admit I’ve always been complacent about dangerous and/or small objects lying around the house. #crapmumalert

I walked round the car to buckle him in, and he had this proud little smile on his face.

“I put the googly eye in my nose!”, he announced.

It didn’t quite register in my brain. I mean, we’d never been worried about our kids and small objects, remember? So I kinda casually looked into his nose.

GAHHHH!!!!!!! I saw a peep of white, sticking half-way out his left nostril.

“Oh!!!!!”, I exclaimed, “You shouldn’t have done that! Let me get it out“. I leaned further towards him and reached out to his nose.

And that’s when he panicked.

He shoved my hand aside, and stuffed his pointer finger up his nose in a hurry. And in that SPLIT SECOND, that one action alone, he shoved the googly eye right up DEEP into his nose, past the soft tissue, and so far back that, later, the ER doctor and ENT specialist would note that it was very very deep in.

I suddenly panicked too, and jerked his head back, and peeked up his nose. NO GOOGLY EYE. I started both laughing and cry-panicking a bit by this point – so Carter was looking curiously over at us from his car seat, and Hunter was looking at me with these giant wide eyes.

“Mama…………. cuddle me”, he said, now quite frightened (probably more at my weird laugh/cry reaction than anything else).

I quickly unbuckled both kids and brought them up to their school, where the teacher tried peering in with a torch, to no avail.

Hustled the kids to the clinic downstairs, only to be turned away because that clinic “only serves Japanese customers” (is this even legal in Singapore????).

Hustled both kids back down into the car, and headed to a random clinic. My parents were already there and found out that regular clinics have no tools to extract foreign objects deep inside orifices. So they told us to go straight to Emergency. 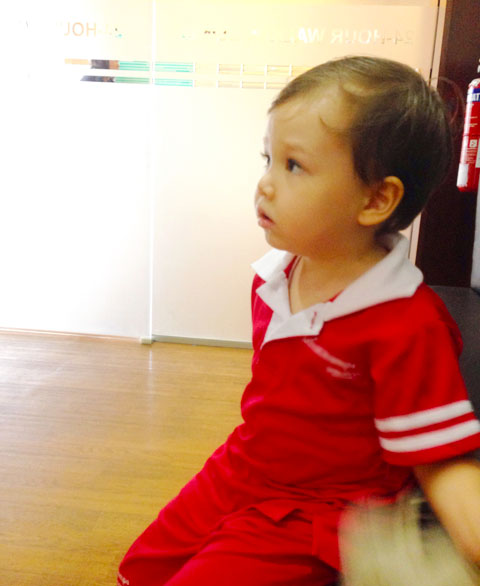 Pulled a detour, and went straight to the hospital, and to ER there. They took one look at him, and said there’s no way they have the tools to help, and referred us to an ENT specialist upstairs. 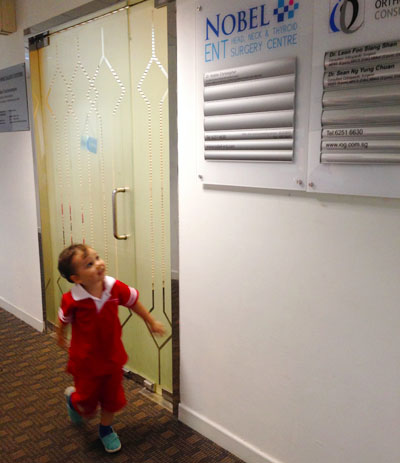 Went to the ENT specialist, and he came out brandishing this: 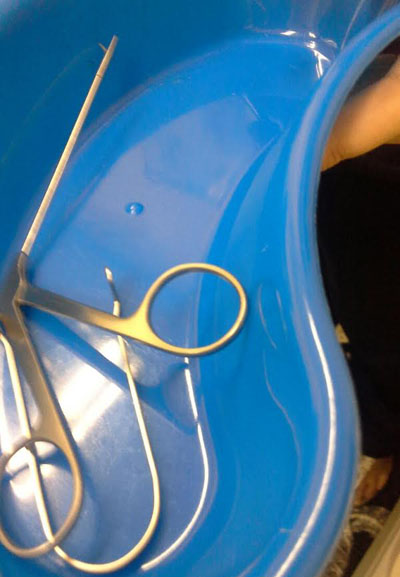 I mean, that metal needle thing was kinda SCARY!!!! What it does is the tip of it opens up like a tweezer, but it’s absolutely tiny. so it goes straight up the nose, grabs the object, and yanks it back out.

Which is exactly what he did.

Hunter, surprisingly, was quite agreeable to lay back in my arms for the whole procedure, and did one loud scream when it was yanked out (it hurts cos it has to pass through the soft tissue at the far back of the nostril first, and because the google eye edges are sharp). And then it was all over…… in about 2 seconds!

But here’s what I’ve learned about what to do about kids and foreign objects in their orifices (ie. nostrils or ears). I hope it helps you if you care for a young kid. It’s the first time it’s happened to me and I’ve learned a lot, and also realised the things to do/not to do in future. Errrr… well let’s hope there is no repeat performance!

I suppose I’m stating the obvious. A lot of young kids may not even tell you what they’ve done. And when the object is so far in, you won’t even see it with the naked eye. The object CANNOT remain in their orifice. You’d kind of presume the body would get it out somehow, but it doesn’t if it’s too deep. What the body does instead is reject it in every way possible – that means that in a week, pus or discharge or blood will come out, and the kid will be really sick with a fever. You won’t know why (because you didn’t see them to do and/or they didn’t tell you, remember?), so you’ll be left really worried. This is why doctors often check orifices and do x-rays on young children if they have symptoms like this.

Go to a regular GP for your referral letter.

Don’t panic like I did and go straight to the hospital ER. They don’t have the equipment either. What they will do is what any other GP will do – write a referral letter to see an ENT (Ears Nose Throat) specialist. We got charged a staggering $80 at ER just to be told that in our 1 min consult. Compare this to about $25 for a standard GP (or even cheaper if you go to a polyclinic etc). That was an expensive lesson for me.

We went to a private ENT specialist and it was $480 for a pretty standard procedure. Sure, he was lovely and gave little stickers at the end, but I’m pretty certain it would be far cheaper at a public hospital. I would be fine paying top-dollar if it was something neurological or severe, but this was just a manual extraction requiring no anesthetic or sedation. 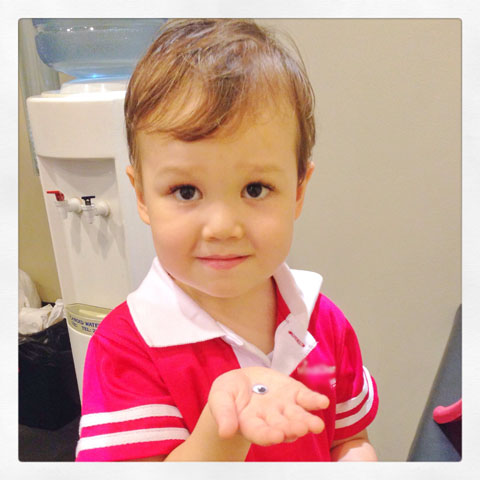 Hunter is well, and has come out unscathed from the experience. Hopefully he’s learned never to do it again, though! And I hope your kids never do too!

And before anyone gets all funny with me (and by funny I mean annoying), I am not a doctor nor an expert so my opinions above are exactly that – my opinions. I want to share my experience because apparently this thing is common with young kids (I’ve seen it on TV but didn’t think it actually happened in real life, surely kids are smarter than that?? Apparently not.), so am only writing about this both to document for myself, and hopefully help at least one person if the same situation arises for them.

Previous GIVEAWAY: Win a set of 4 tickets to watch Junior Claus!
Next HI, I’M STILL ALIVE. With my own percussion band!

Thank you for sharing! I m sure u must hv been in great distress when it happened – I can only imagine how anxious you must hv been then! Glad everything is ok now!

Yeah now that it’s over, it’s actually kind of funny. But at that moment, it was pretty alarming!

I’m always on alert since hb told me he used to shove peanuts up his nose as a child …. Glad to know Hunter is ok now!

What is the awesomeness about shoving stuff up your own nose? Gah… crazy kids!