We had a huge family scare yesterday.

I was on a playdate at a friend’s place all day. Some time in the afternoon, Mum called and asked me if I was driving home soon. I said no, as Hunter had just gone down for his nap, and asked why. “Oh, nothing.. just a small issue. I’ll work it out”, she said casually and then put down the phone.

During the afternoon, Chris had also called twice. He didn’t really say much, but would just casually ask what I was up to, etc. Thought nothing of it, and simply asked if he wanted a lift after work, which he declined.

I got home, and saw Mum, Dad and Chris getting out of their car as well in the carpark. “Heh. How coincidental!” I thought and waved at them.

It was only THEN that they told me the whole story.

Earlier that morning, Dad told Mum that he was heading off to their club’s gym, and would drive home afterwards. He does this all the time, so no worries.

But hours later, he hadn’t yet arrived home. When he finally did, he was in a bit of a daze, and quite confused, asking “Where was I? What did I do?”.. stuff Mum couldn’t answer ‘cos she had no idea where he’d been either!

After him thinking really hard and trying to retrace his steps, turns out he’d gone to the gym as per usual… did his exercise and weight-lifting as per usual…. and then……

He couldn’t remember anything else after that AT ALL. Only that he found himself a bit confused, driving back home (thank goodness his long-term memory wasn’t affected and he could get himself home!!!), because he didn’t know what he was supposed to do at that point.

It means he’d had a total memory loss/blank for around 2-3 hours!

Since he had (fortunately) driven himself back home safely, Mum called Chris (she said she didn’t want to call me for fear I’d panic and drive back unsafely with Hunter in the car), and he left the office to go get my parents and drive them straight to the doctor and then the hospital.

They checked Dad over and said he’d be alright for now, but scheduled an EEG and MRI for the next day to eliminate the threat of a stroke or epilepsy.

Really can’t believe NOBODY – not Dad, not Mum, not Chris, not even my aunt that was informed – told me about this entire episode!!! I know they didn’t so I wouldn’t freak out, but sighhhh.

So we had a very worrying and fretful night, and I woke up early this morning to take all of us to the hospital. For 2-3 hours, Dad was hooked up to machines and scanned etc etc.

Then we all headed in to the neurologists office and tuns out…… Dad’s brain is perfectly healthy and unaffected! In fact, his arteries leading up to and inside his head are as healthy as someone half his age – a real testament to how healthy and fit he (enviably) is 🙂

Dad was diagnosed with Transient Global Amensia. I won’t elaborate on what it is, since you can read all about it at that link, how it occurs, who’s at risk etc. The good news is that it isn’t recurring, and there are no after-effects. The bad news is… Dad will never recover his ‘lost’ 2-3 hours of time 😛

Anyway, I wanted to share this with you, because it is truly scary if something like this ever happens to yourself or a loved one. So, please read the information at that link, so if you are witness to this happening, you’ll know what it is and how to deal with it.

I leave you with a picture of Dad’s brain scan – a superbly and unusual picture of health that’s apparently rare among 60-somethings. I’m very pleased. After all, he IS my Dad, and Dads live forever, right?? 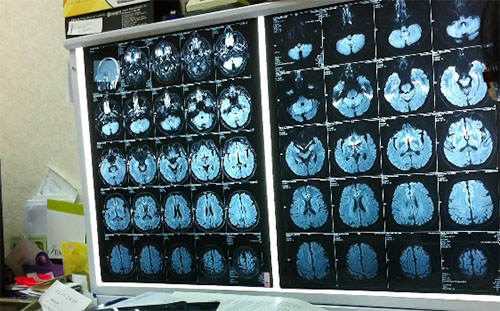 Woah, I’m so glad he was ok and nothing bad happened. It’s one of the things I fear with my parents – especially if they are out with my kids somewhere.

Yeah my dad was very fortunate.. but we were all so worried when it happened!

I understand how you feel, parents are always protective over their children.

I was preparing for my wedding when my uncle passed away. NOBODY told me and I only got to know it 6 hours later though a family friend I met on the streets. He offered me his condolences and said that my uncle’s passing is so unexpected. I stared at him in shock and denial and I remembered I keep asking if he got the right person. >_<

Hi Evelyn, wow that is quite the story! That family friend must have felt a bit guilty that he was the one to break that news to you though…

It’s been ages since I visited (because I’ve been neglecting my livejournal) and I read about your dad’s scare. Glad that he’s fine, though.

Very weird. My Dad had health issues last month, just had surgery to remove some stones in the gall balder and getting surgey again in 2 weeks. Another guy in my team found out his Dad had prostate cancer a few weeks ago, lucky it’s been remove and hasn’t spread. Very weird, some feng shui mystery around Nov 2011 and Dads?

OUCH.. I didn’t know, your poor Dad, so sorry to hear about that! So fortunate about your colleague’s dad too, he must be so relieved. I guess it’s always scary as we and our parents age.. sigh!

Hey so sorry to hear Bev. My dad’s been suffering from minor strokes for a couple of years now, the latest one hitting only a month ago. So really felt for u when i read this post =( It’s no joke seeing what my dad has to go through day in day out, so I’m super glad yours is well. Don’t want to wish these things on anyone! Just have to pray hard & entrust our dads’ lives onto God’s capable hands! *Hugs*

Ohhh sorry to hear about your dad Steph, I hope he’s doing OK still though? Praying he will be well and not too affected.. 🙂

Thanks for sharing about this Bev, I’ve never even heard of this condition before. Being a long time follower of your blog, I’m very glad to hear that your dad is okay and that he wasn’t hurt within those 2-3 hours. Definitely a big scare for your family for sure! xx

I hadn’t heard about it prior either.. so I’m hoping that by blogging this, others wont get freaked out if it happens to someone they know. cos after all it’s actually not a terrible thing to happen – just that it gives quite the scare, like you said!!

How terrifying for him, and for all of you!

So glad there are no after effects.

Yes that was what I was worried most about.. but fortunately, all ok 🙂

Thank God your dad is fine!

My dad also had a mini health scare a while ago and had to go for a mini operation, so I can sorta understand the fear that you must have gone through.

Wow… that is so scary for you too. I hope he is doing all ok now?

Hi, what a scare! Great to hear he’s all o.k. At time like this I always remind myself and others that health is the most important thing, as long as everyone you love is healthy that is all that counts.

VERY true.. that is the most important thing in the world to pray for!

Glad your father is okay! I’m a neurologist and I saw two patients with TGA last time I was on call. Usually this does not recur, as you said, and is not associated with any brain damage.

Wow Marie-Christine, that is so interesting that you’re a neurologist. I suppose TGA is fairly common, or at least common enough that you would see 2 patients in a day.
It’s reassuring that it’s more of a ‘glitch’ than something that’s far more serious… very glad it wasn’t a stroke or epilepsy!

Thank God everything is ok!!! So scary!

My dad was really fortunate.. thank God it all ended well!

So glad to hear that everything’s fine now! Must have been quite scary at that point in time! Take care gal 😀

I was so shocked, I thought it was some strange joke!

So glad to hear that your dad is ok Bev, you poor thing that is pretty scary for all

Hah. That was my reaction too when I first heard

Oh my, I can imagine it must have been such a scare! My Dad was in a similar situation recently, he got dizzy while driving and got into a minor accident. Thankfully (by God’s grace) my elder brother happened to be driving just behind him, and so was able to help!

Glad your Dad is ok and keeping himself healthy!

WOW.. it was definitely fortunate your brother was right there behind him. Hope he’s all ok now!

Thanks Jess, me too 🙂

Wow – scary stuff! So pleased that your dad is ok!

It really gave us quite the fright!