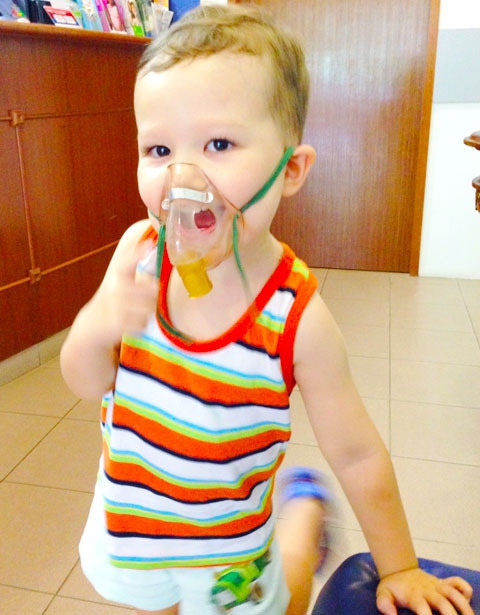 Hunter and I both caught some cough bug a week ago, which also generously gives us a enough phlegm in our lungs and throats to drown ourselves in. Joy.

Hunter actually has a way milder version of it. The doctor wrote it off as a common cough and just gave a few meds like decongestant and cough syrup. He also gave Hunter a dose of meds via the nebulizer – an apparatus that you stick over your nose and inhale the aerated medicine.

I was expecting full scale hysterics, but he was actually incredibly interested in the nebulizer (he’s a gadget freak!) and keen to try it out. So that made my life easy!

I, on the other hand, have a killer version of it. I’m coughing so hard and so constantly that my whole body moves, the inside of my lungs are sore, and my throat is swollen so I can’t swallow properly and it’s created some lacerations *ouch*. I’m on antibiotics and similar meds to what Hunter is also on.

We both cough A LOT when falling asleep at night, and the moment we wake up in the morning. It’s awful for me to feel so sick, and even more awful to hear my little boy cough that same cough 🙁

The doctor said heaps of people in Singapore have the same thing, and she’s treated so many in the past two weeks. So, stay hygienic, safe, and illness-free, everyone!!

Previous LIFE’S LITTLE QUOTES: I miss you, Daddy…
Next LIFE IS FULL OF TUMBLES (and giggles)

You might want to try diffusing Thieves. It really helps.

Ooo thanks for the tip Marie. I’ll go look it up!

Good that Hunter didn’t fuss with that nebulizer, I hated that thing when I was a child, my parents say I would kicked up a storm the moment I see it.
Have a speedy recovery you two 🙁

Hope you and super cute Hunter have a speedy recovery!
God bless

THanks so much hon! We are getting there… 🙂

Get well soon! I have had 2 coughs in the span of 2 weeks.

Thanks hon, and argh take care of yourself too!