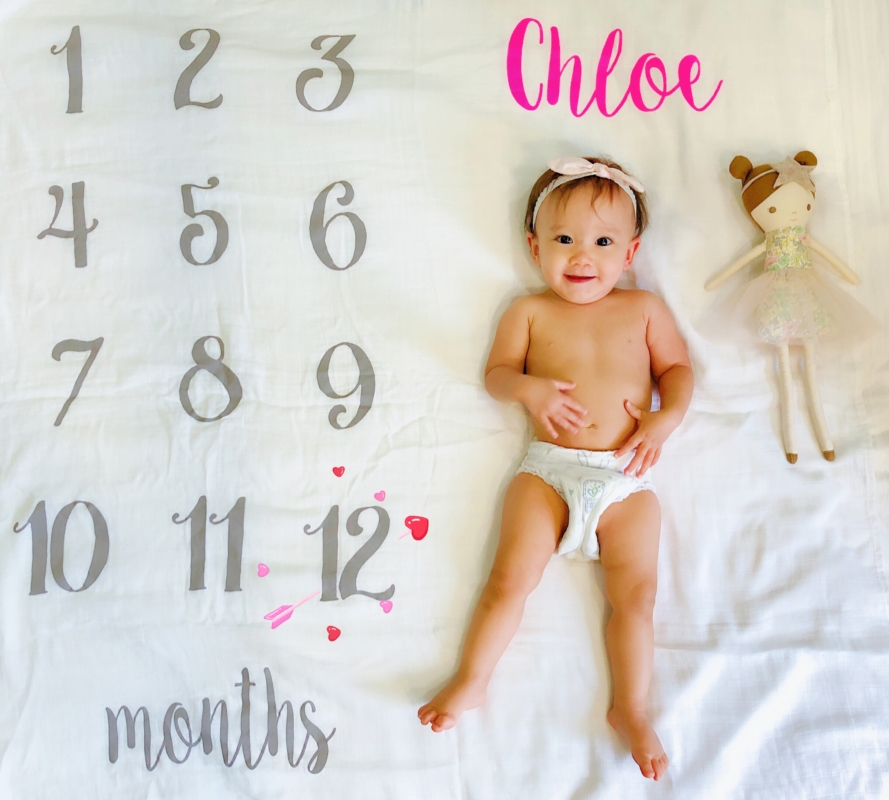 Third time having a baby, yet it still makes me give a little start when I realise one whole year has gone by. It’s seemed to have flown back, and yet has also dragged by – all at the same time.

I suppose the first year of raising a newborn is ALWAYS crazy, no matter how many times you’ve done it before. 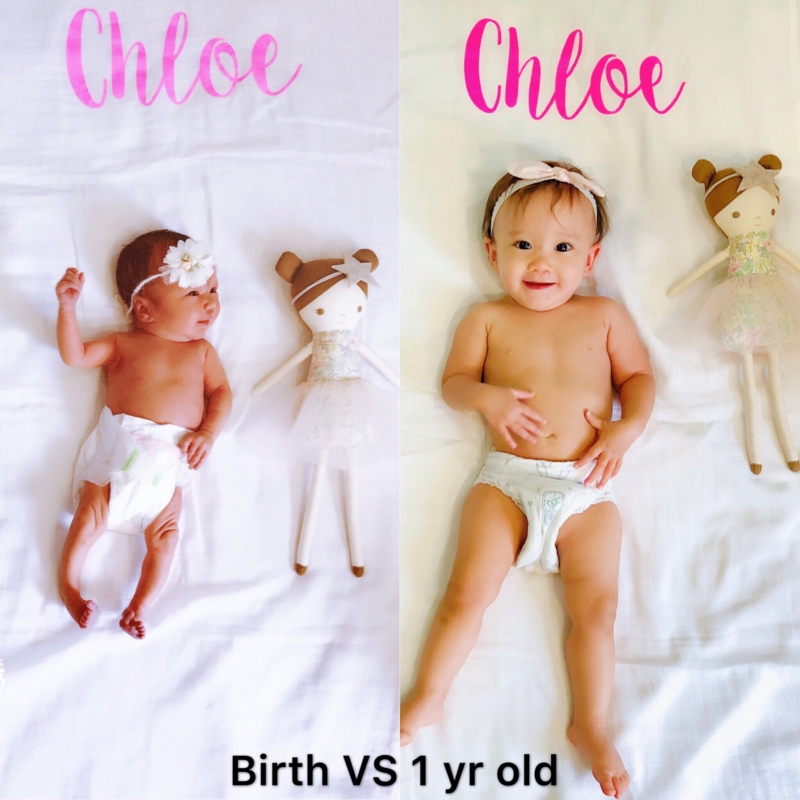 From 3.1KG to 7.5KG. Look at those skinny chicken wing legs of hers! Now they are still very lean (compared to her brothers who both had gigantic fat-rolled thighs at the same age), but about double the length.

I’ve been attached to her (or is it her to me?) 24/7 for 12 months, to the point where I can’t really be apart from her for more than 30 mins without feeling anxious and skittish. I think we have mutual separation anxiety LOL. 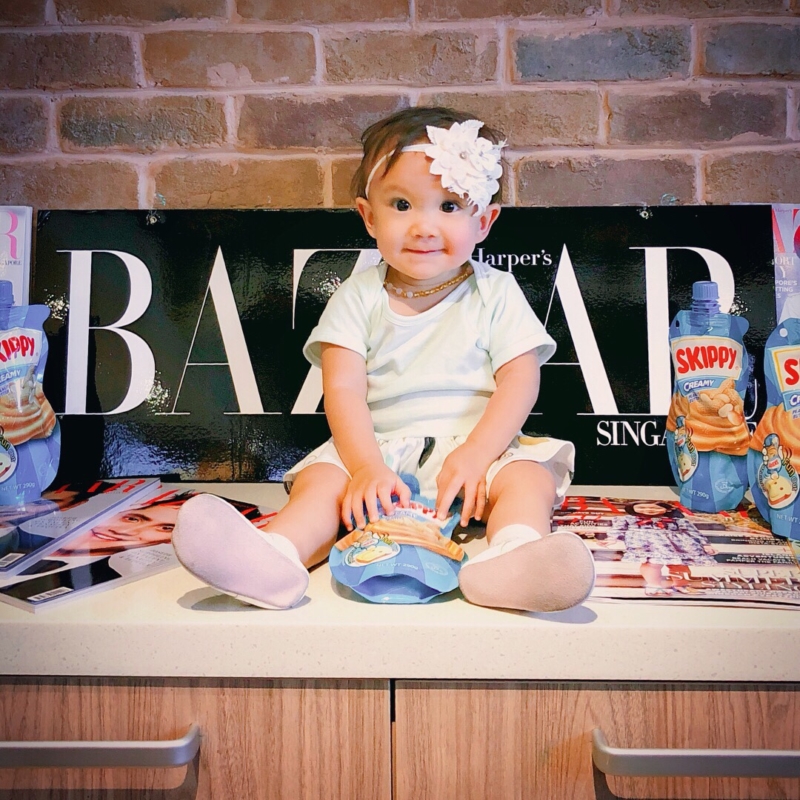 She’s changed from a newborn that lay there and cried and screamed all day long (yes, she was one of those babies, for a good 6 months AT LEAST), to a little chicklet that has a (big) personality of her own.

The days of her crying incessantly seem so far away now, like a slip of a forgetting memory. Yet, at that time, I honestly felt that I wanted to stab myself in the face. If you’ve ever had a difficult baby that screamed and cried nonstop – no matter what you did – you’d know the feeling. The awful stage may have passed, but you still somewhat remember the horror and desperation deep inside your mind, right?

All I can say is, I am SO relieved she is over that, and now is really interactive and FUN. I suppose all she ever wanted to do was to understand words, and communicate her needs. And now that she can, it’s all good!

Chloe went through some HUGE development leap just after she hit 11 months old – physically and mentally. Her pincer grip is now finely honed and super precise, and she’s permanently cruising around. Not walking unassisted yet, as her right foot is still turned in a bit so we need to wait for that to straight out before she can fully walk by herself.

And, mentally, she’s actually really different VS a month ago, and I wasn’t the only person to notice that. It’s now really obvious she understands words and instructions (ie. “pick up the ball, and put it in my hand”), and she also is much better at communicating what she wants.. which has morphed her into a much “easier” baby to look after.

She’s still INCREDIBLY demanding of attention, and basically needs full-time, non-stop, unadulterated attention ON HER AT ALL TIMES.. otherwise the whole world falls apart. It’s like she was born to be an only child 😉 I thought third babies were supposed to be easy going and accepting?? 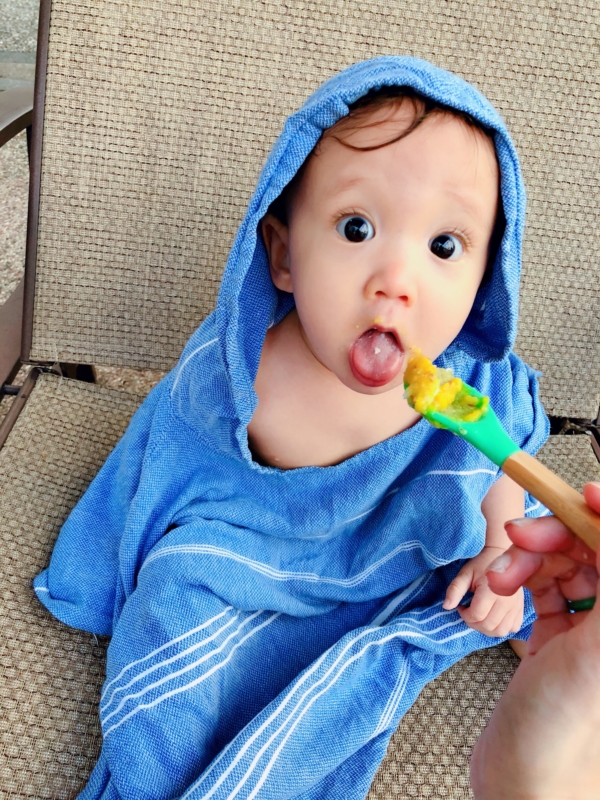 This crazy food monster is now a bit of food connoisseur, just like Carter was (and is). She inspects her food carefully, watches what others are eating, and has very specific tastes. For example, she likes RED dragonfruit, but will refuse to eat WHITE dragonfruit. Dislikes mushy food, but is extraordinarily interested in adult food and will insist on eating off our plates.

In the photo above.. she is eating Indian idli and curry!!! How cool is that! She absolutely loved it.

It’s actually a substantial amount of food for a baby her age.. yet she’s still on 0 percentile weight. We still have no idea where all her food is going.. 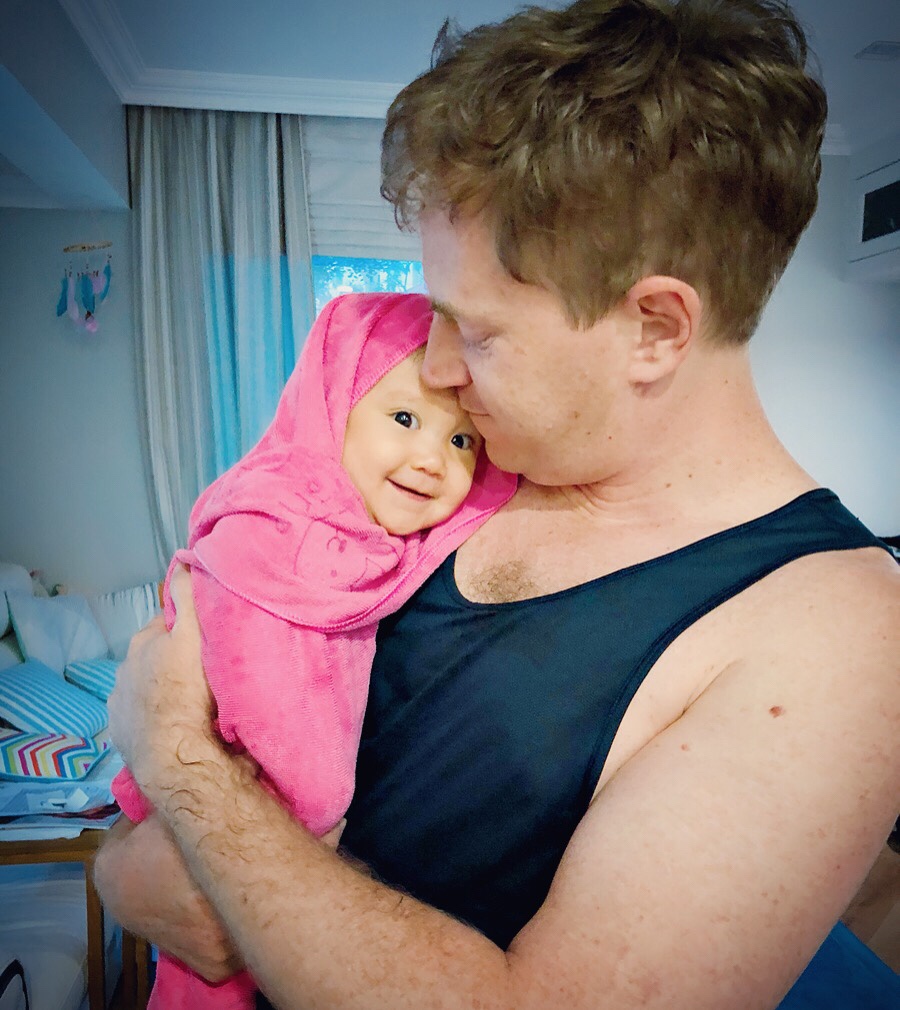 Overnight sleep is still the same.. asleep (and can put herself to sleep alone) at 7:30PM and sleeps straight through to 6AM (ouch).

She will, from time to time, wake randomly in the middle of the night.. but will put herself back to sleep. Unfortunately, she will ~SCREAM~ a few terrifying screams – just for the sheer hell of it – which means it wakes Chris and I up in a panic, for no good reason. Really not fun. 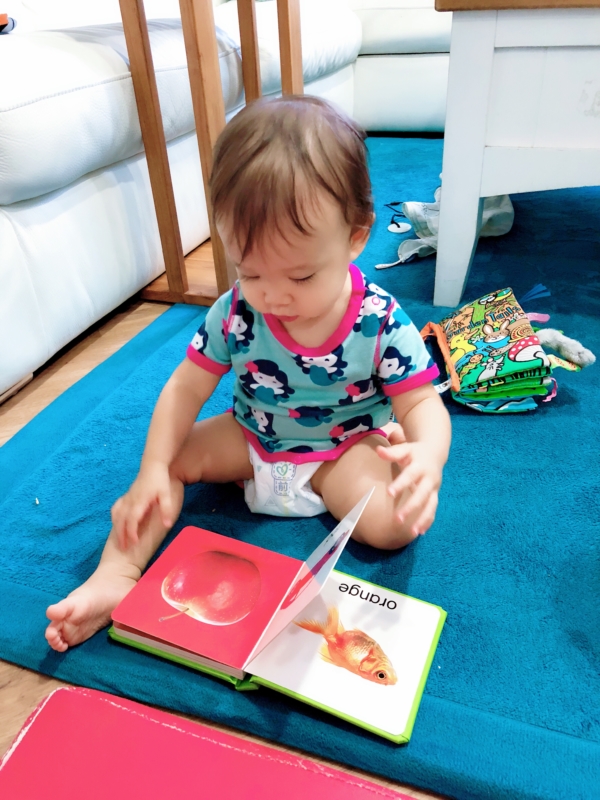 One of her favourite activities, reading! She is absolutely nuts about flipping through books, which is pretty novel to us, since both our boys were not interested in reading when they were infants. 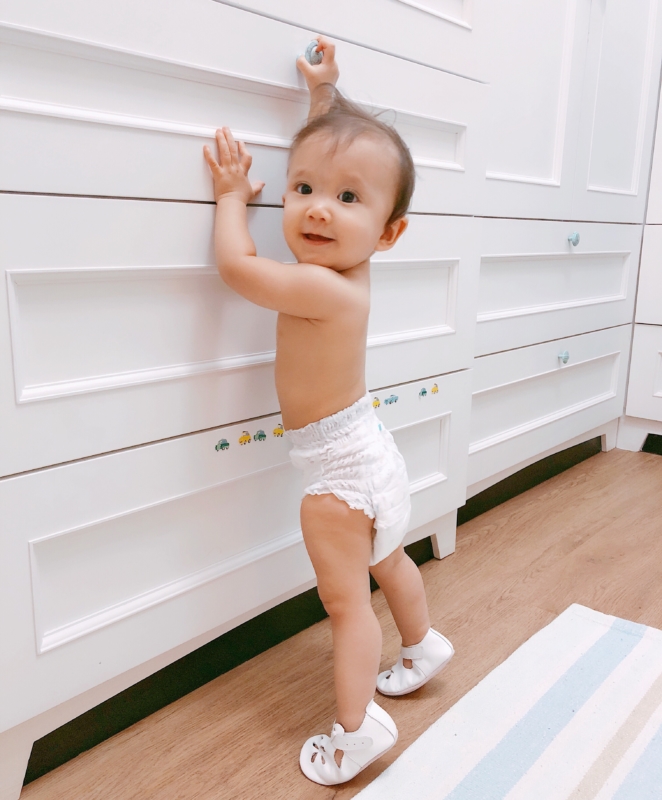 Her other favourite activity.. dancing! She wiggles and jiggles her bum immediately when she hears music, which is kind of a hilarious sight as she bounces away on her skinny lil legs!

She has very very little interest in ‘baby’ toys, but will beeline for the boys’ big-kid toys instead. The more baby unfriendly, the better! 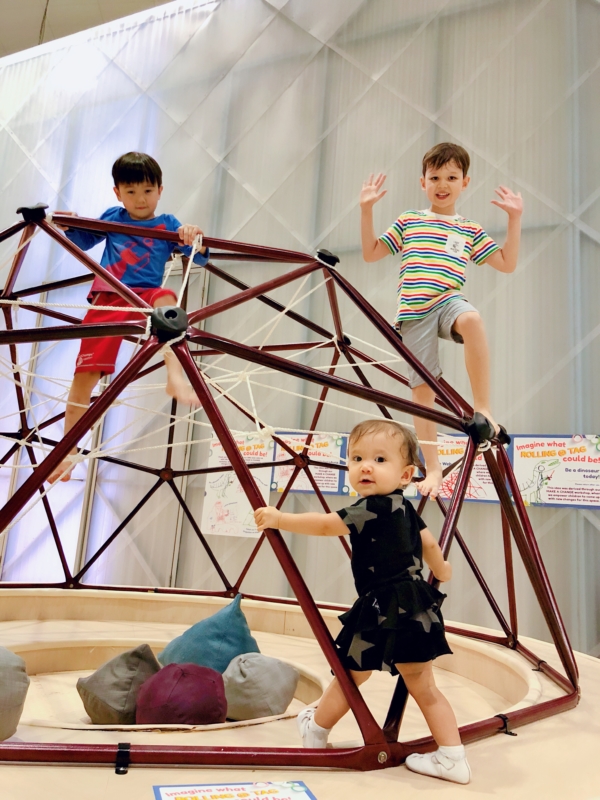 Fancying herself as a toddler and NOT a baby, she also climbs and chases after her brothers.. like she’s one of them. Then gets angry if she can’t keep up and screams until they come to her. This baby cannot wait to grow up! 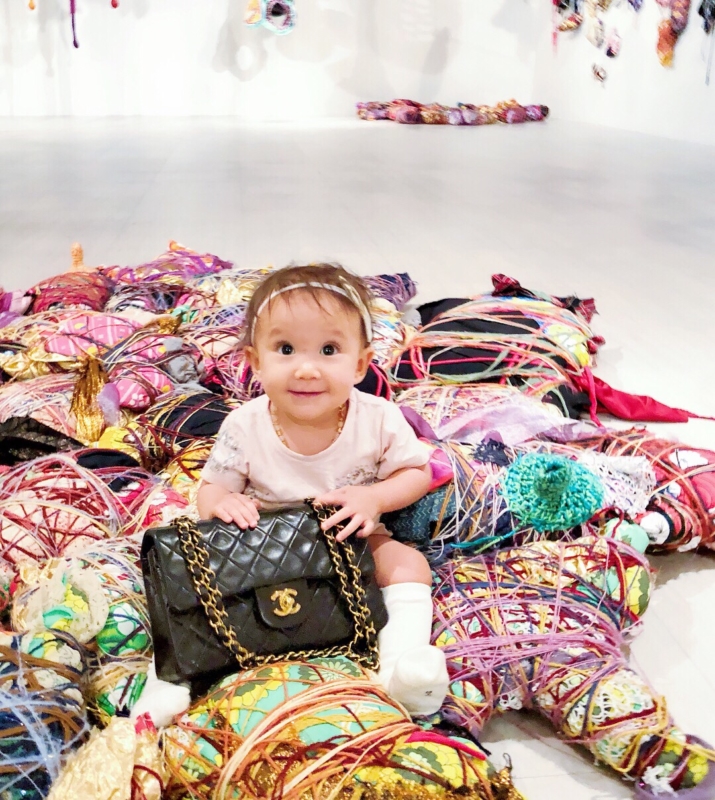 She loves bags. She loves yanking on the straps/chains, loves emptying out all the contents, and just digging through everything. If I’m desperate to keep her occupied, I give her my handbag and she’ll be busy for at least 15 mins (an eon, in her world!) 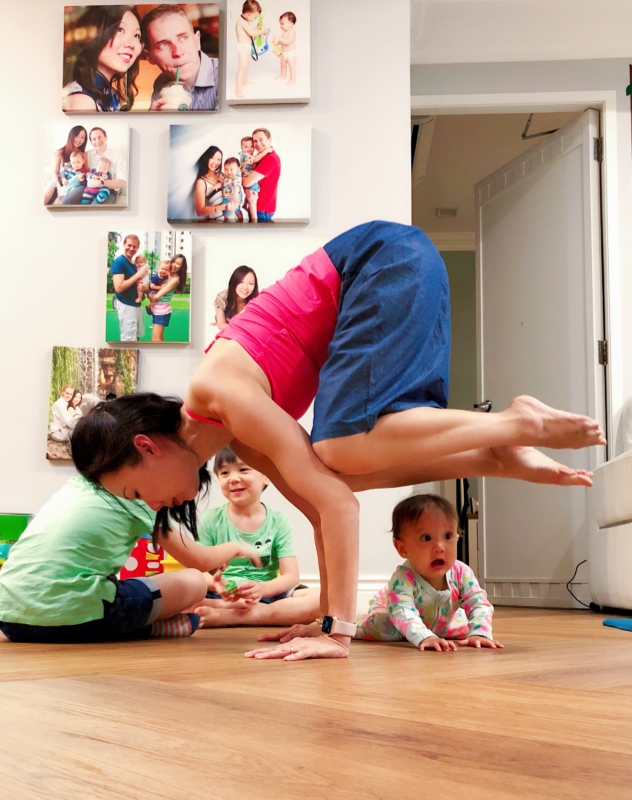 One of the most hilarious photos I’ve seen of her. A typical day in the life of a #yogamom‘s kid.. just trying not to get kicked in the head! 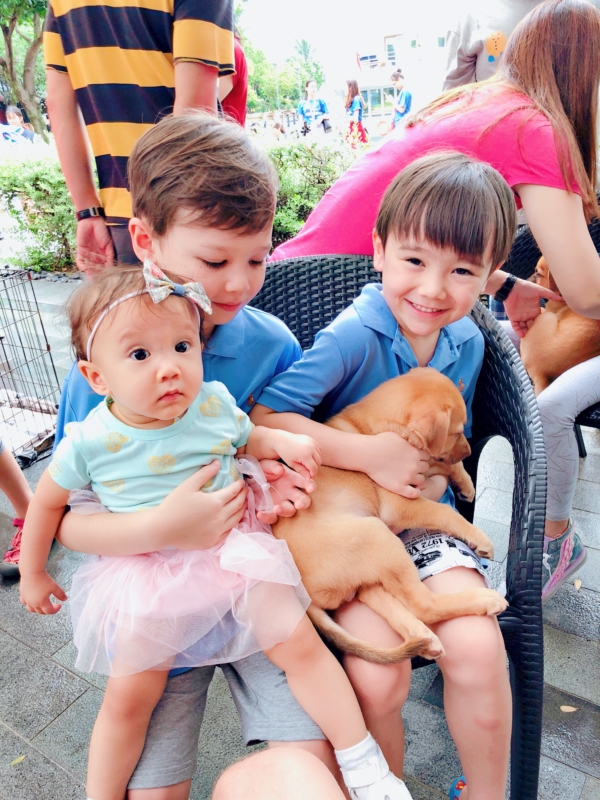 My three ducklings. Absolutely LOVE having three children! It’s hard, but a beautiful kind of difficult. 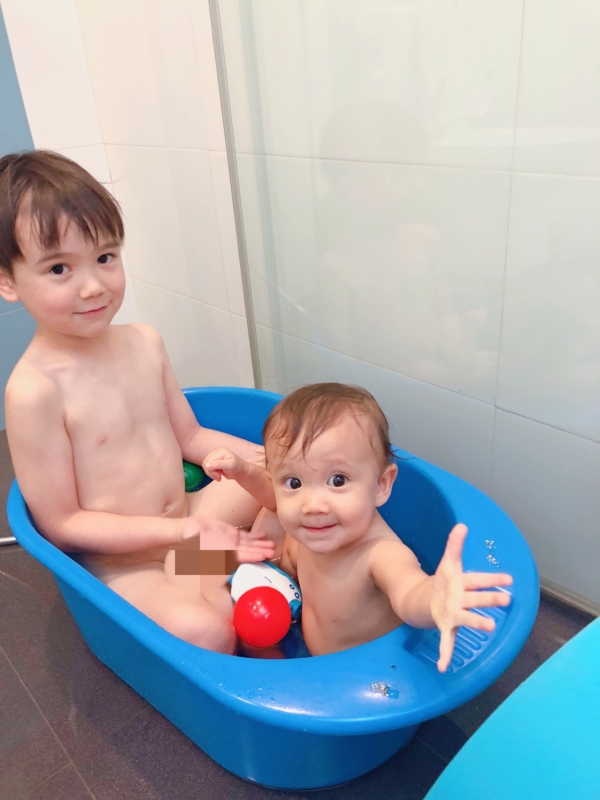 Having fun in the tub together. These are my two super noisy, super active, children. I envision them tearing the house up together in a couple of years! 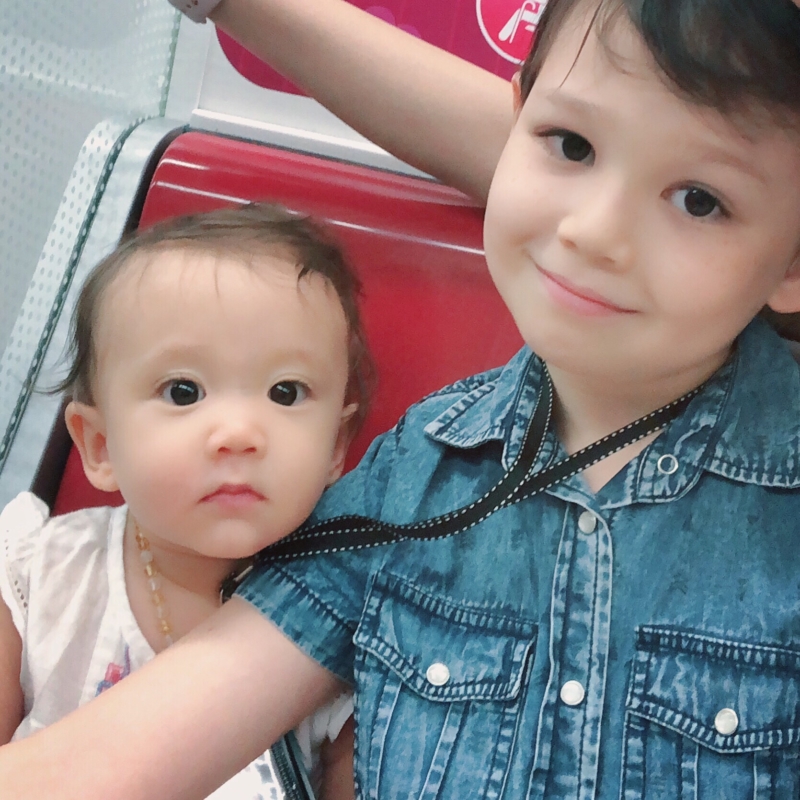 These two are complete opposites in terms of personality, but yet adore each other. Hunter often will suddenly burst out with a “Why is she sooooo CUUUTE?? I can’t stand it!” and then grab her in a vice grip – I mean – cuddle. And then she screams in protest from being manhandled. And yet she squeals with delight when she sees him after school, and is always fussing around him at home. 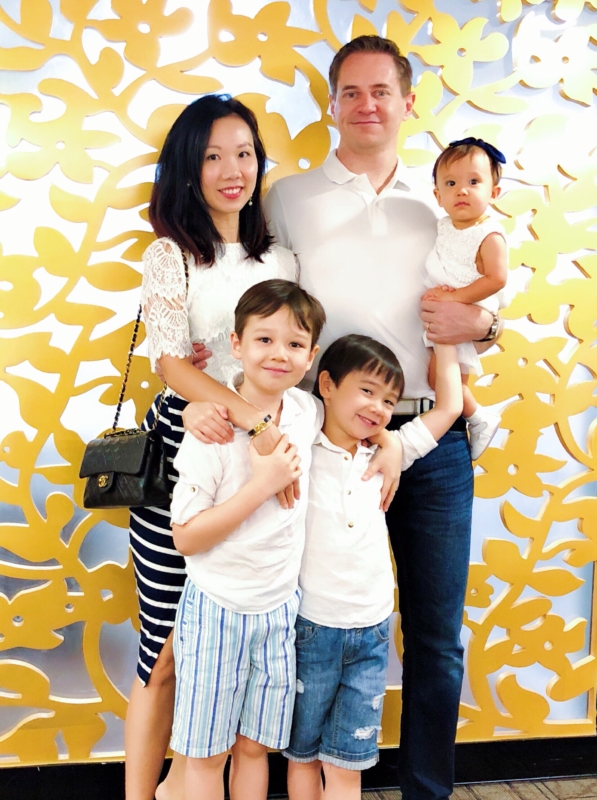 Family. These guys mean everything to me.

Happy 1st Birthday Chloe, you are so incredibly loved!