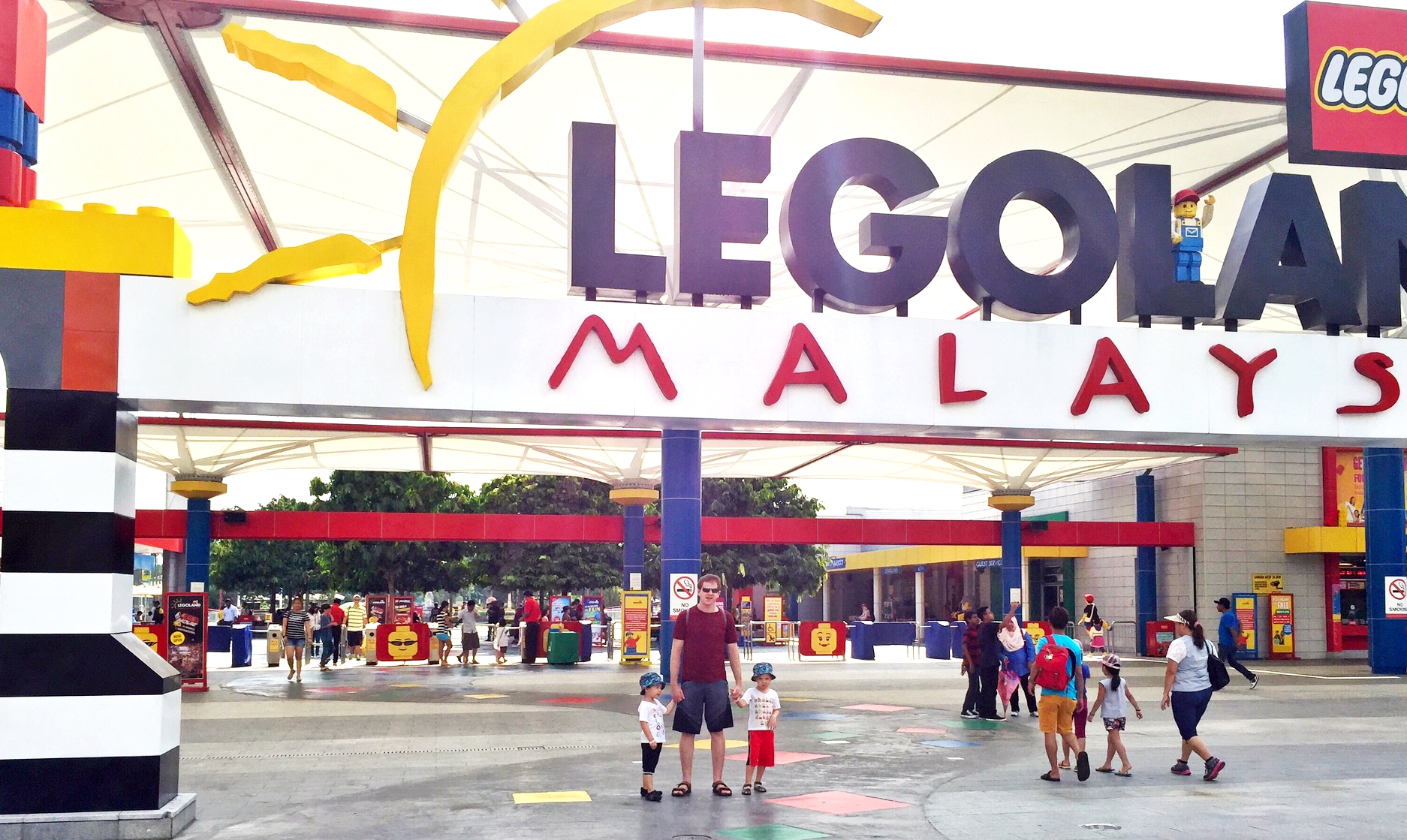 We spent two days in LEGOLAND Malaysia…. and loved it!

It was an easy drive from Singapore to Legoland, especially since we left at 8AM in the morning. It was smooth sailing and we arrived in about 40 minutes.

I’ve seen some folk whinging that Legoland is crazy hot, like it’s so rare and unusual for it to be so. Erm, it feels exactly the same if you were to walk around in Singapore outdoors. Legoland has trees around and lots of air conditioned cafes and areas to hide in if the heat gets to you, so it’s not really a big deal.

TIP: Do the Waterpark from 10AM to after lunch. Take a nap. Then hit the Theme park at 4PM onwards. We did this on both days and it was a perfect – it meant that we were swimming when it was hottest, and doing the theme rides when the weather was cooling down. Plus, almost no queues – we either walked straight up or only had a handful of people ahead of us. So much win. 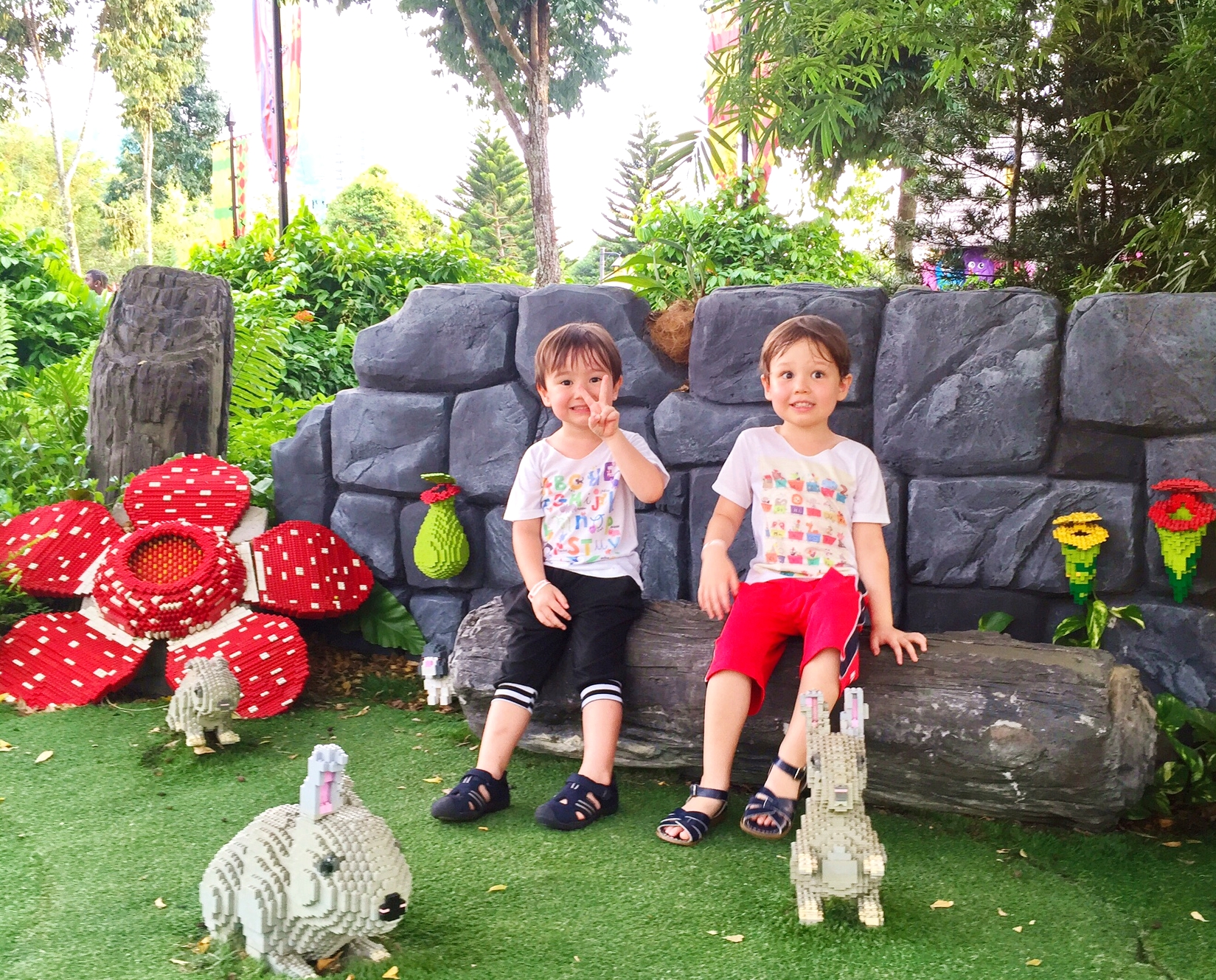 So this post is just about the Theme park. The Waterpark post will come once I get round to it…

What impressed me about the Theme park was the crazy amount of Lego decor. I wonder how many man hours it took to make it all?

How cute is this little garden theme! 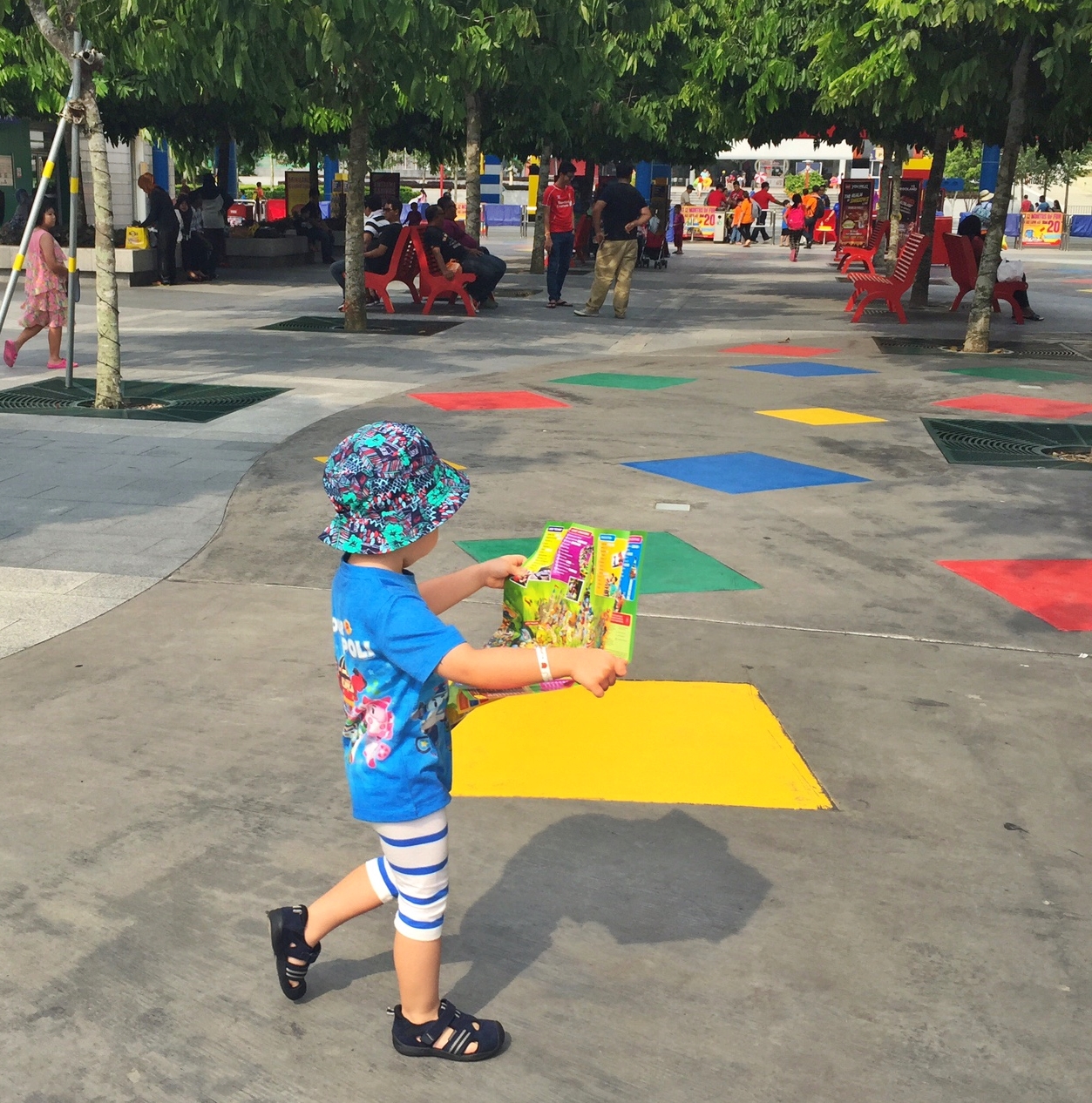 The kids were way into the cartoony Legoland map, and kept referring to it to plan out our day. This is Carter above, looking like the perfect little tourist. 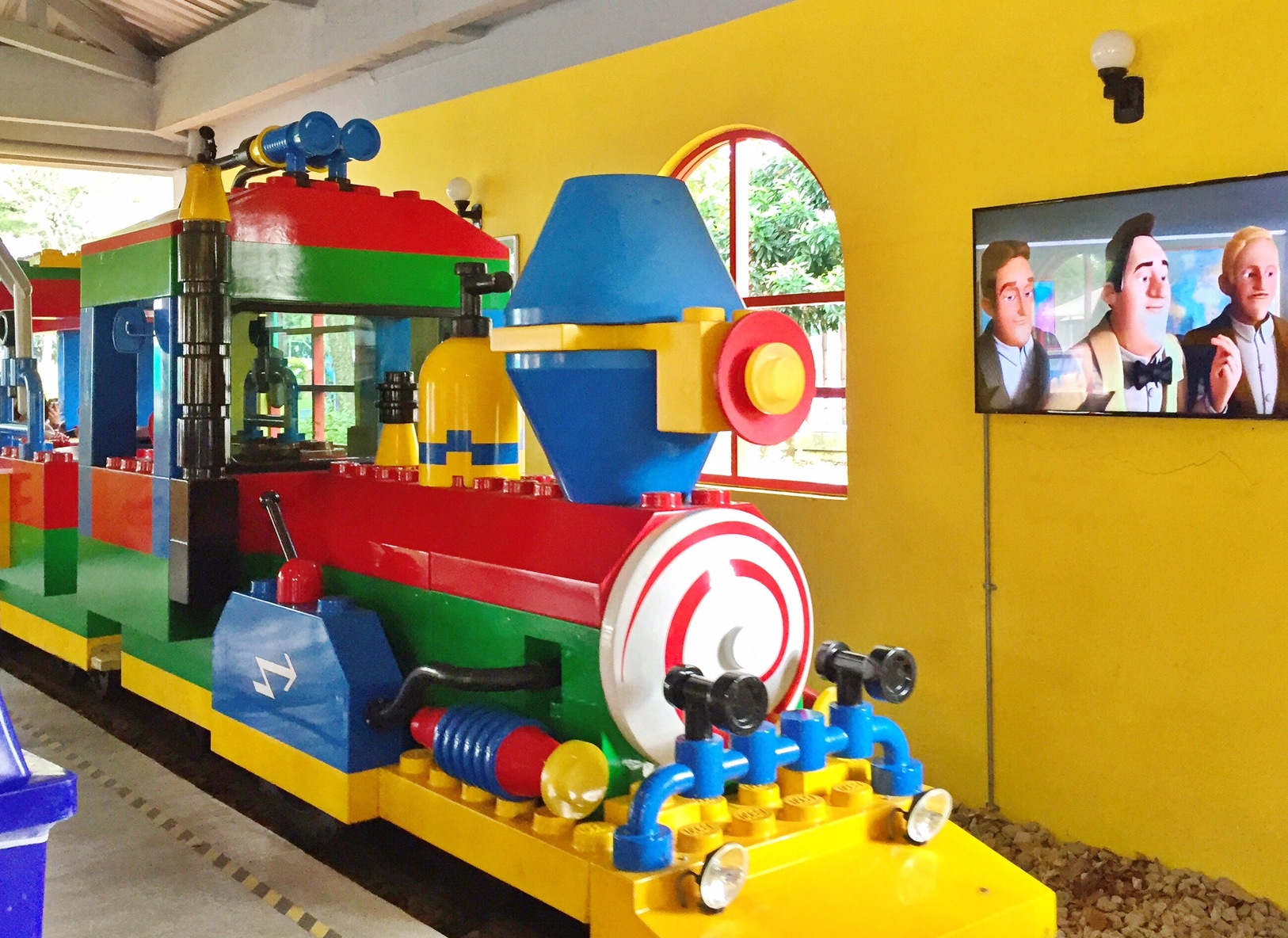 One of the star attractions for the kids – the Lego train. Hop on for a tour around the Legoland theme park – pretty nifty for scoping out the area and to catch a cool breeze. Only downside is that there’s just one stop, it would have been better if there was a second stop at the opposite end of the park, and two trains running. 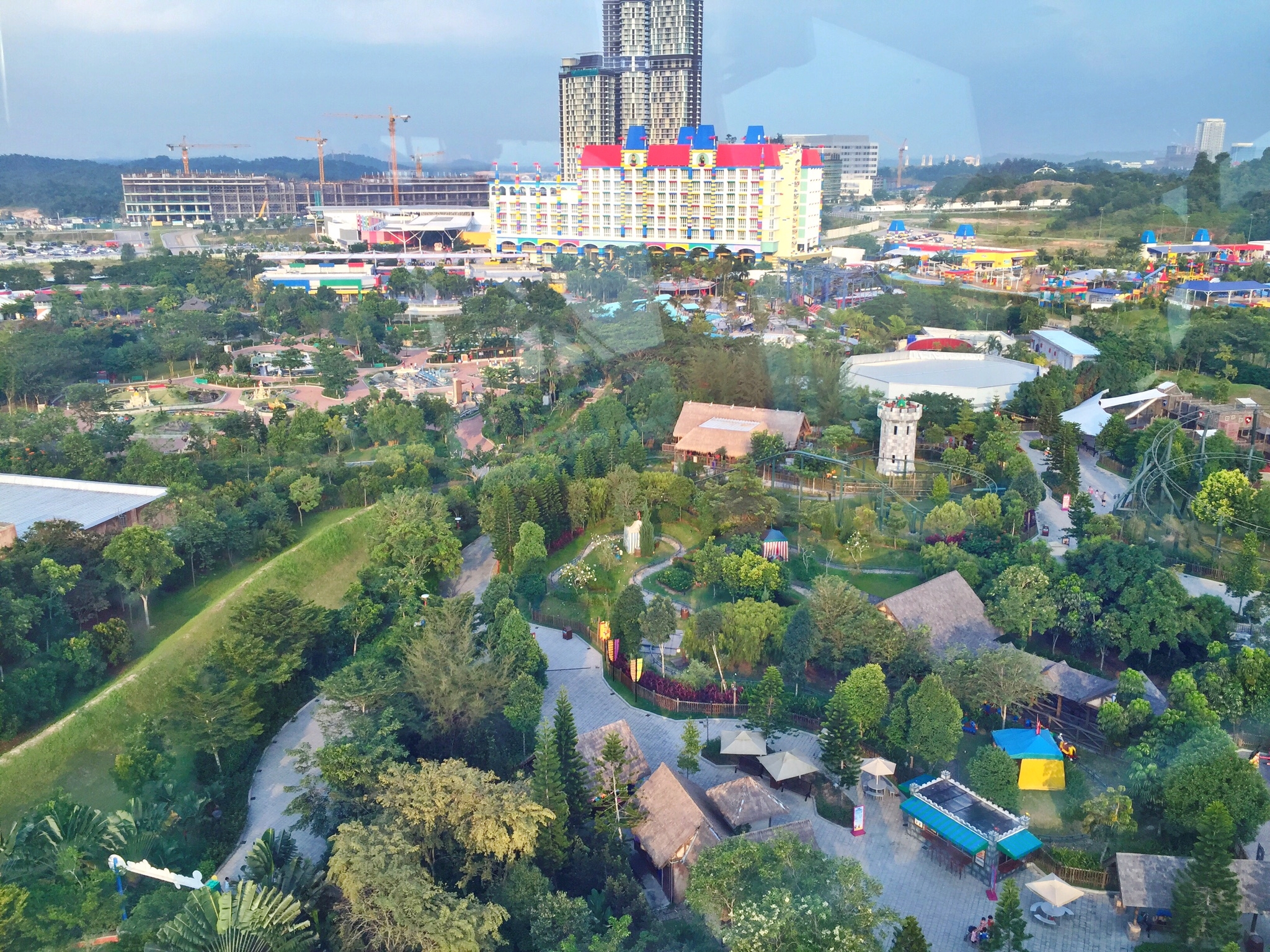 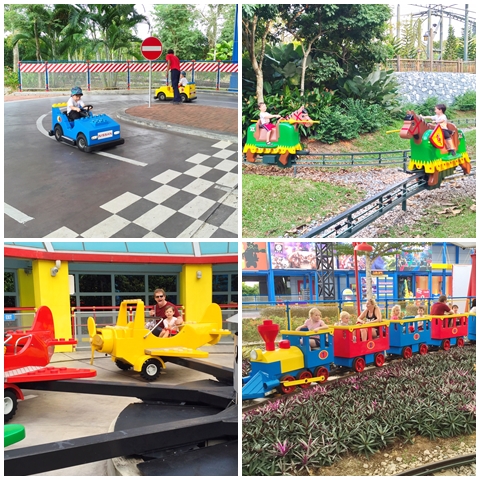 A bunch of ride-on attractions that really appealed to the kids. You’ll see here that these rides are suited for younger kids, and probably best for 3-6 year olds. Everything is so cutesy and colourful, and almost everything was under cover so you’re not in the blazing sun. 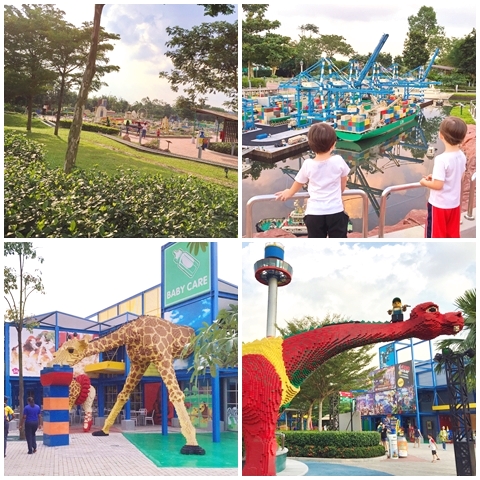 In the middle of the park is an EPIC Lego creation. Actually, loads of creations. Lego blocks are used to recreate famous landmarks around the world.. and it is seriously impressive. There are moving parts as well, like a working (mini) train, etc. The kids were fascinated.

Dotted around the park were GIANT structures like the giraffe and red dinosaur above. All made of Lego blocks. Do you think the entire thing is built with Lego, or do you think the inside is some steel structure and they just stick Lego blocks over it?? Either way, how long does this take to build?! 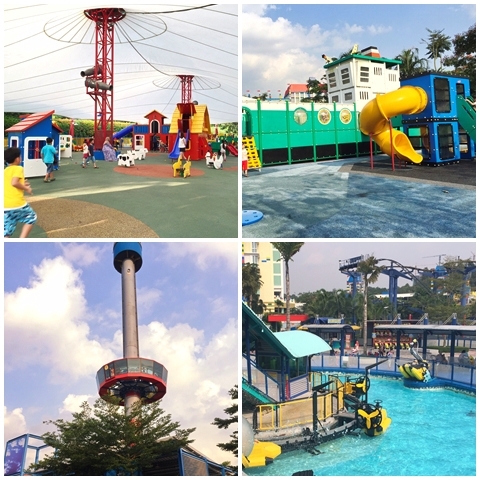 There are several playgrounds for the kids.. which actually attracted my kids as much as the rides themselves.

There is also one water-based attraction that is excellent if you want a bit of a cool off! 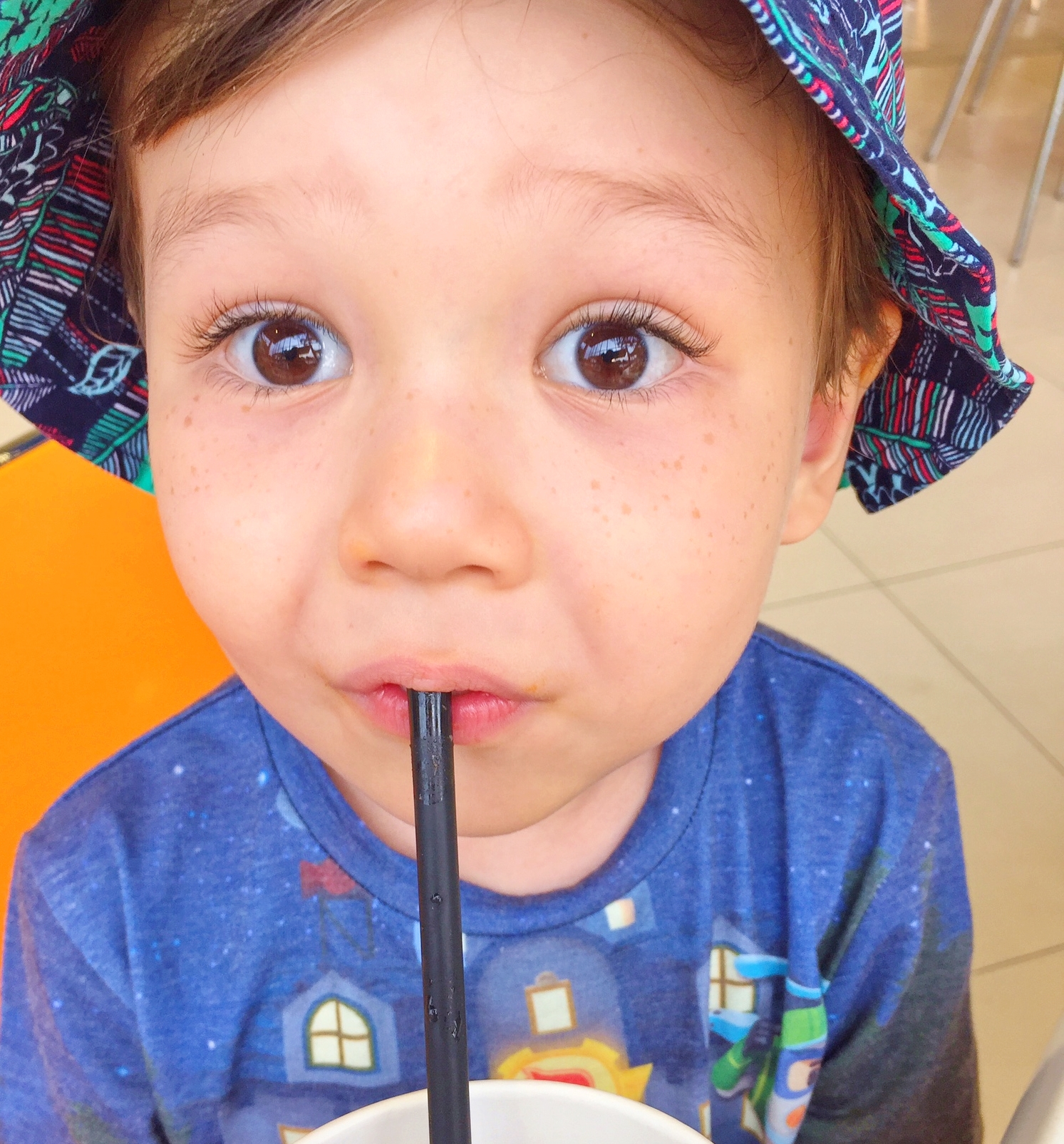 Keeping cool with a cup of iced water. Remember to bring sunblock and hats for everyone! So glad we did, as we’d have been sunburnt otherwise. 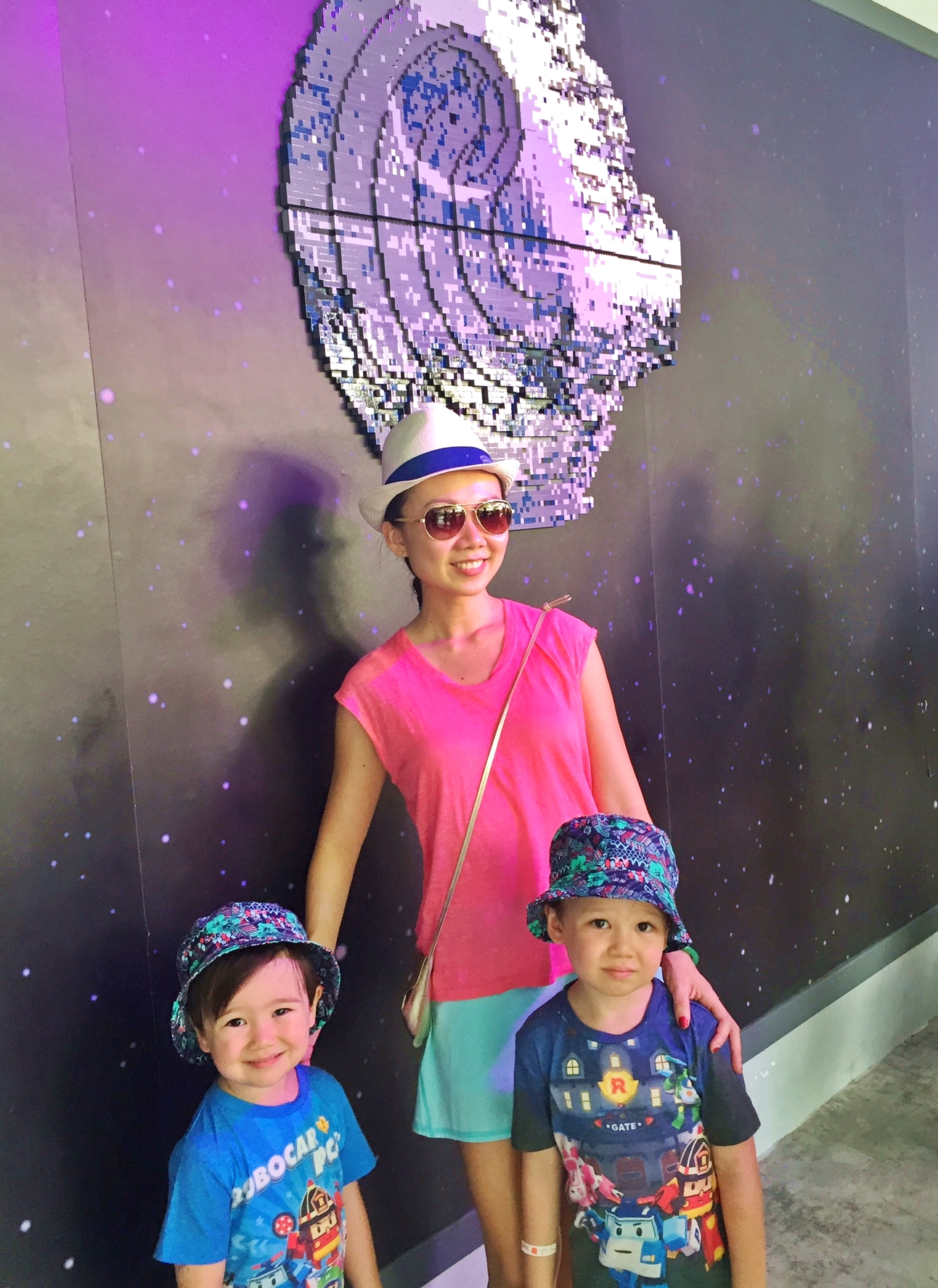 Guess where we are? Only Chris and I were keen, since the kids had no idea what Star Wars is… hence their pained expressions at being asked to SMILE FOR THE CAMERA! QUICK! NOW! LOOK EXCITED OKAY! 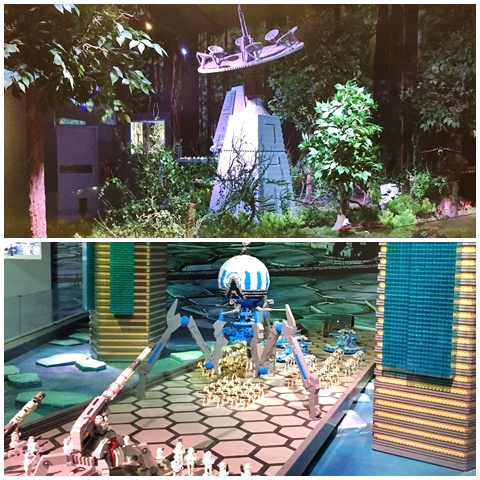 Inside the Star Wars attraction (hellooooo wonderful cool air conditioned area) was a mini Lego Star Wars movie which the kids loved, then a large assortment of Star Wars movie stills, all recreated in Lego. It’s super impressive and awesome to see if you’re a Star Wars fan. 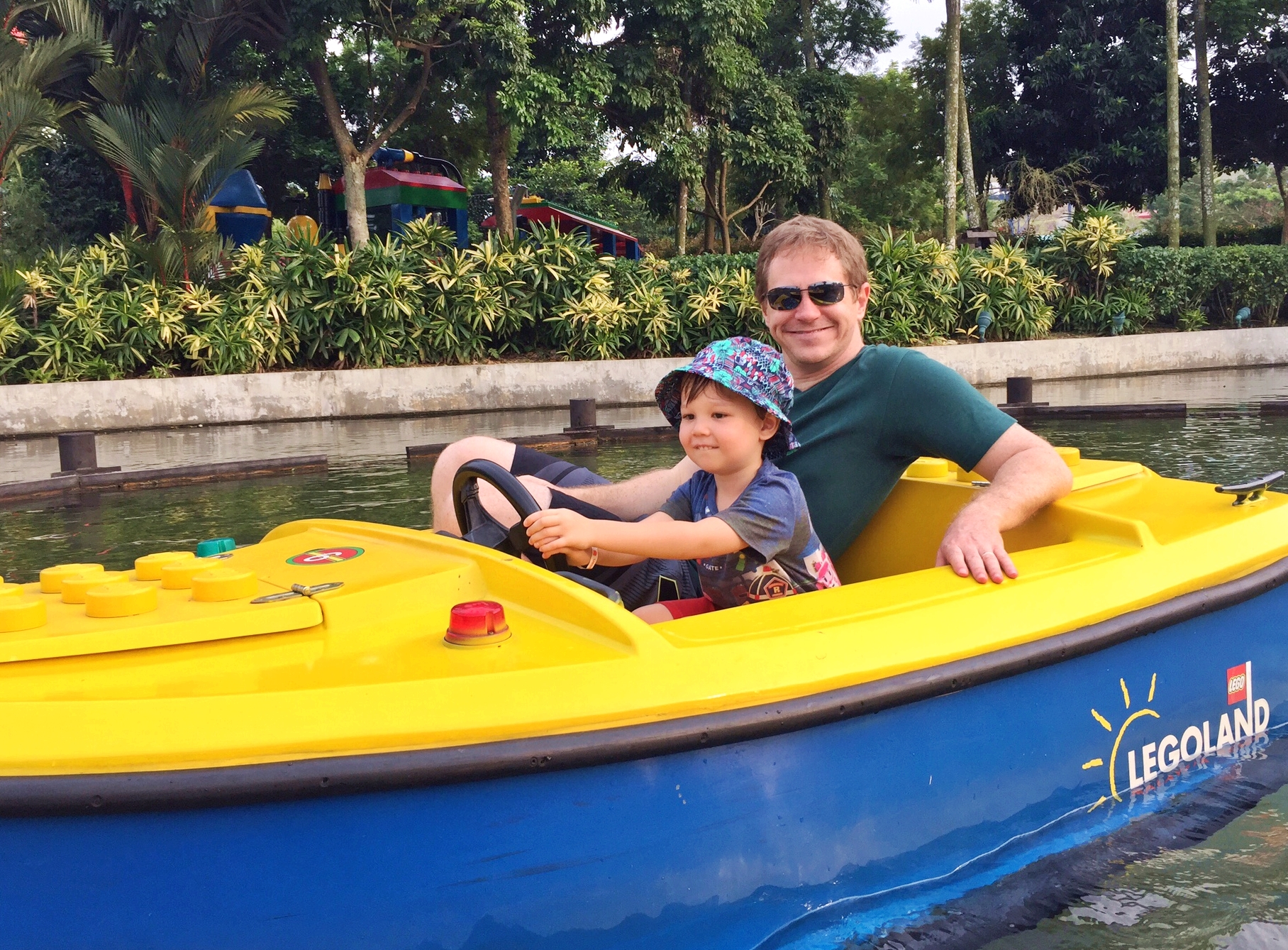 The kids favourite attraction were these Lego boats. They’re electric powered and you step on the pedal then drive it round a series of bends. It’s actually very cool and the kids had a blast! Hunter was pretty good, but Carter just kept going around in wild circles and crashing into the sides like he was playing Bumper Boats. Then laughing like a maniac. 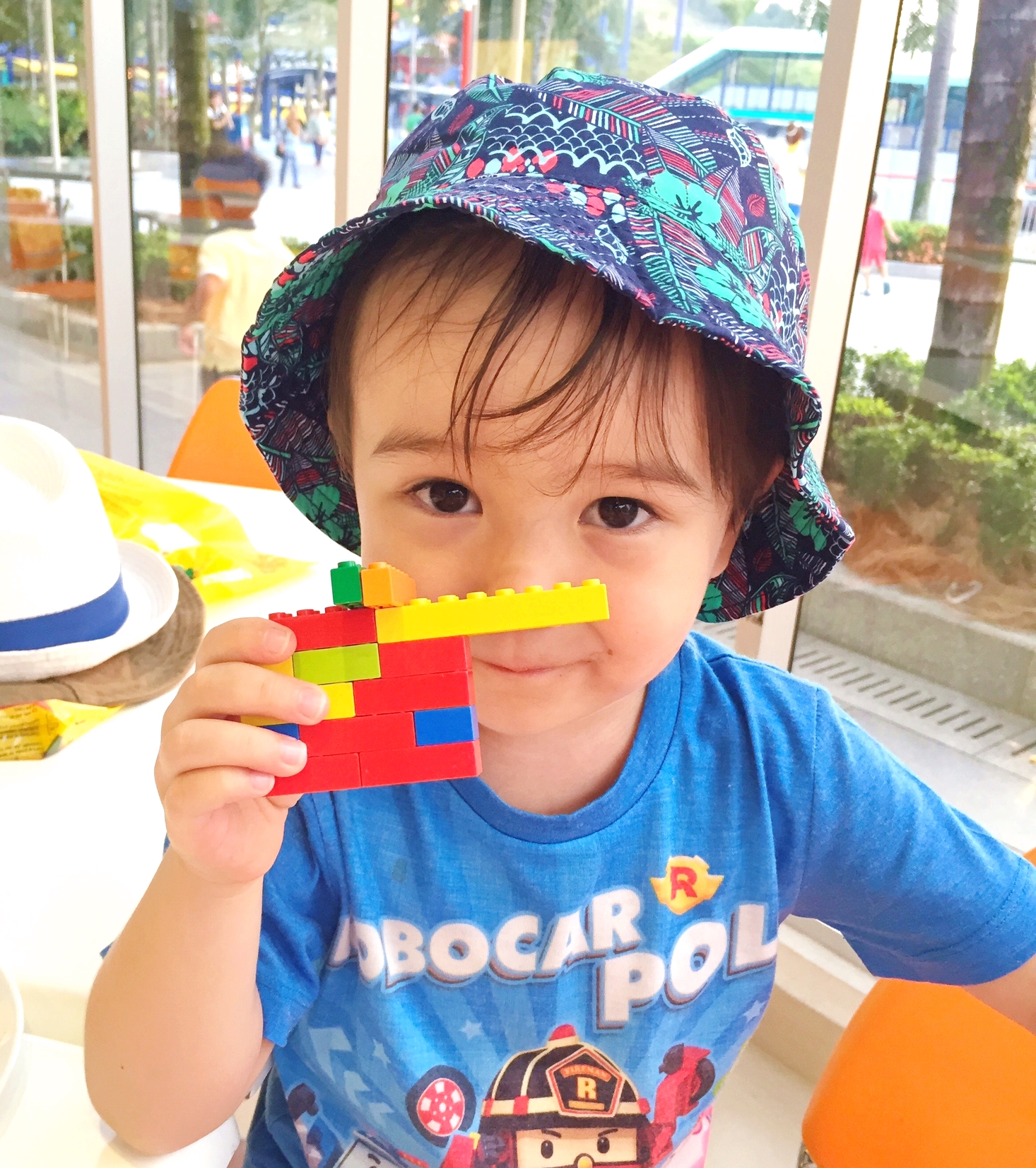 All the (air conditioned!) eating areas have tables stocked with Lego, so the kids were kept well occupied. I just hope they wash the blocks often, since I imagine lots of sticky hands play with the Lego.

Carter was exceedingly proud of himself for building this “water gun”. He’s really into guns, much to my dismay. We have zero in our house and we don’t even say the word, so I imagine he’s picked this up at school or somewhere outside. Why can’t he be into rainbows and unicorns instead of silly guns? 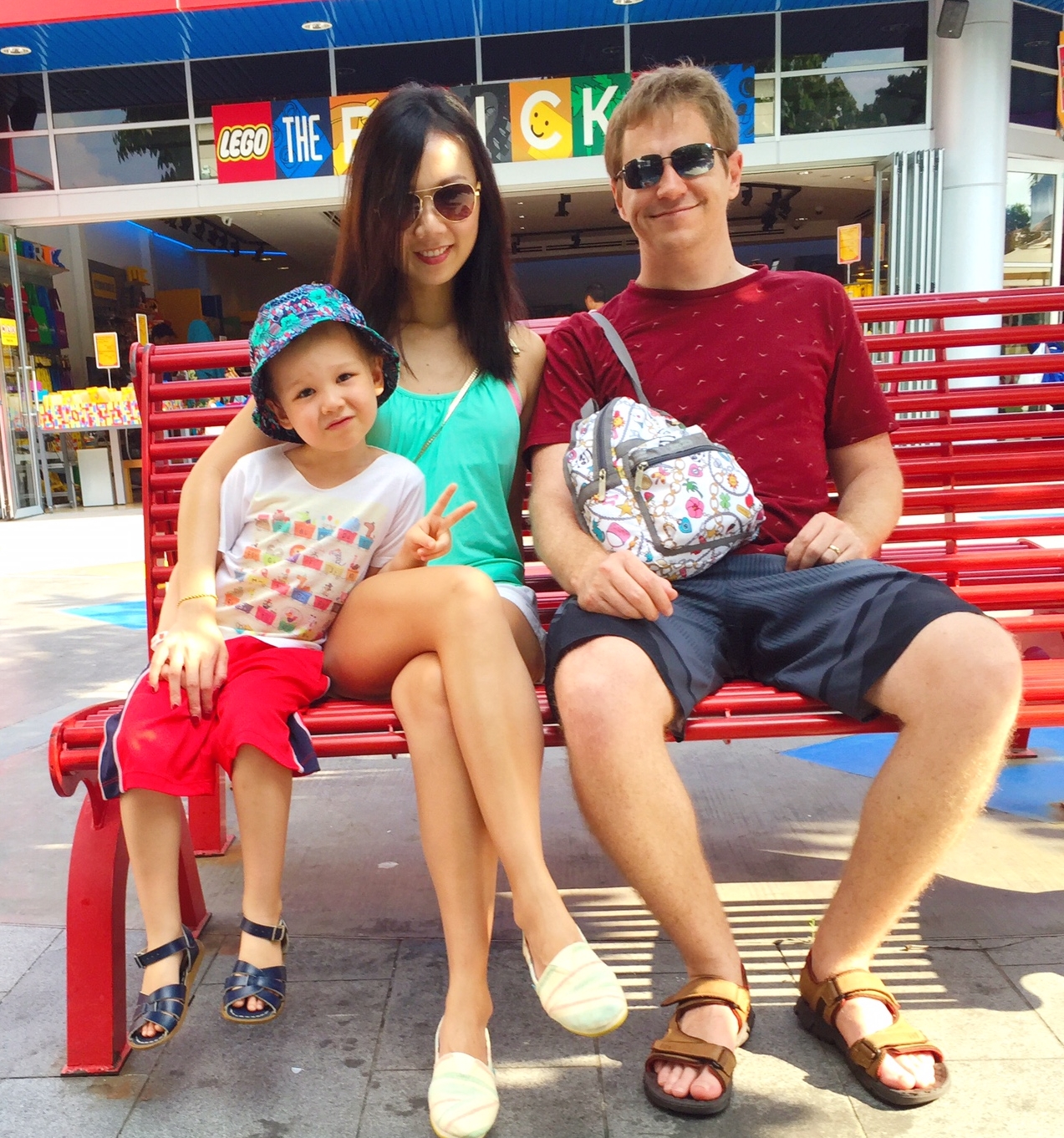 The best family picture we got, missing Carter because he designated himself Family Photographer.

We were chilling in the shade and watching people go by. You’ll see in all the photos here that the crowds are actually pretty tolerable. And remember what I said before? We went at 4PM onwards, and found that queues were minimal-to-none, and you can clearly see that there aren’t many people in all these photos. I can’t stand crowds and I dislike people near me (or worse, touching me!).. so I was really happy with our plan.

For that reason, I’d happily go to Legoland again. We had so much fun!