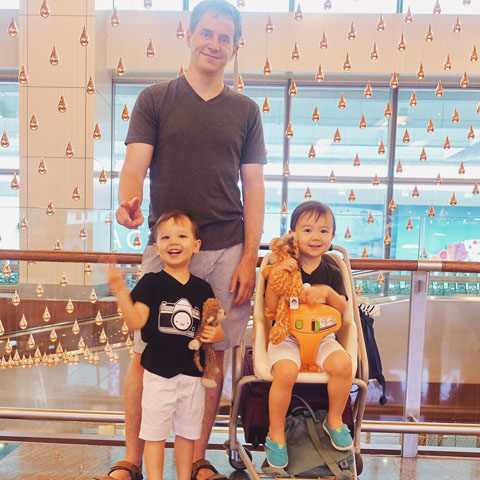 Chris took the kids on a boys only trip to Phuket!

Cue Hunter’s idea of a hilarious joke: “We are going on a boys trip now. Next time, YOU get to go on a girls trip, Mummy. All by yourself. Cos there are no other girls in our family. Haha!” It was actually quite funny the first time, but not after the tenth time he told it…. 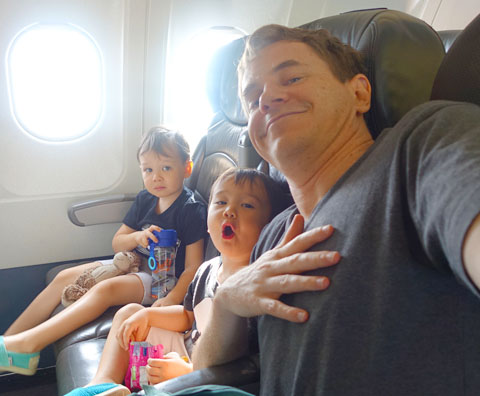 The very capable Daddy with his two boys. They were quite the attraction in Phuket, with people in wonder that a father was handling two kids by himself on a holiday! Both were very well behaved, but…. 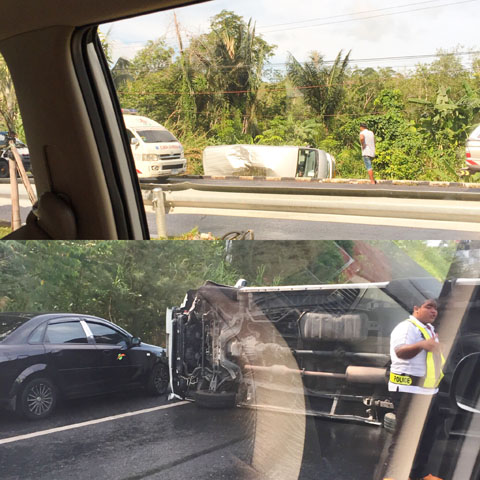 I joined them the next day, after I’d cleared up some work stuff. Coincidently, there was an accident on the way to the hotel too. But it didn’t involve me, though it looked pretty bad – with two vans on their side. 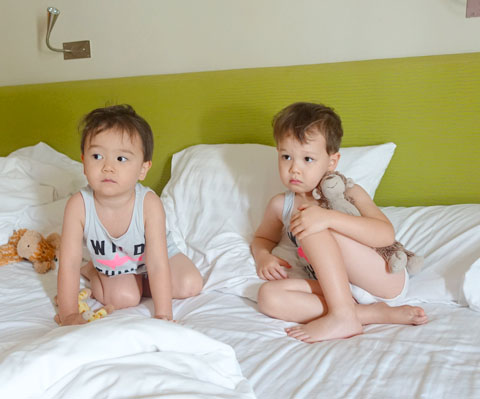 Something so irresistible about mussy-haired boys, all snuggly and delicious in the morning. They got treated to kids cable TV – something we don’t have at home – so they were in awe. 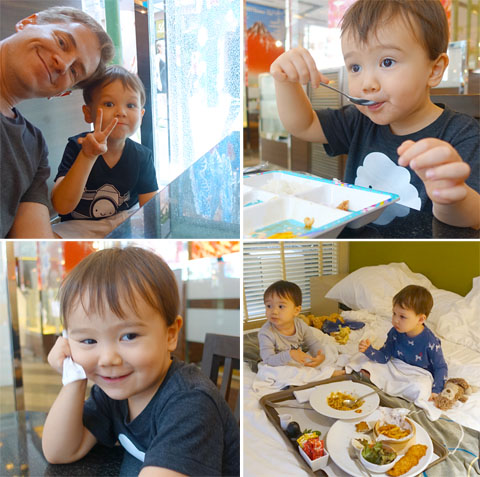 A couple of photos from Chris’ stint at solo parenting. Likely as proof that the boys did eat and weren’t running around naked or anything 😉 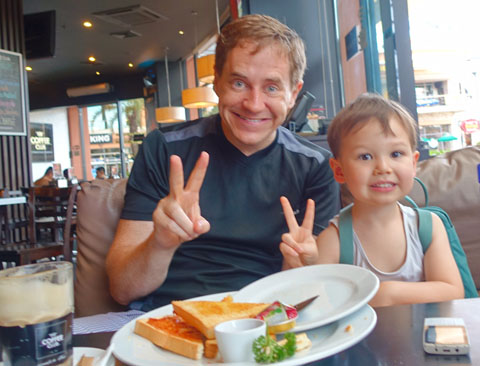 A photo taken by Carter. Not bad composition! 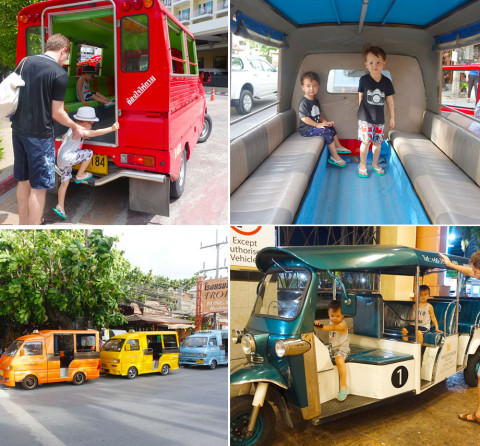 We stayed at Millenium Hotel, right smack in Patong, the tourist central. The good thing about staying here is that you have easy access to any and every amenity you can imagine. And as you can see, the method of transport is by tuk tuk, which the boys ADORED.

Tuk tuks are basically 200 baht flat rate for getting around the Patong area. 300 baht if you travel a little (ie. 10+ mins) further. This translates to about SGD$8-10, and that’s pretty pricey! I hear you can bargain it down a bit if you’re ruthless, but most won’t budge.

However, since the kids adored riding in tuk tuks, we were the suckers that paid 200 baht a pop…. for a TON of tuk tuk rides. Yes, the kids were delighted, but my wallet felt rather empty afterwards. 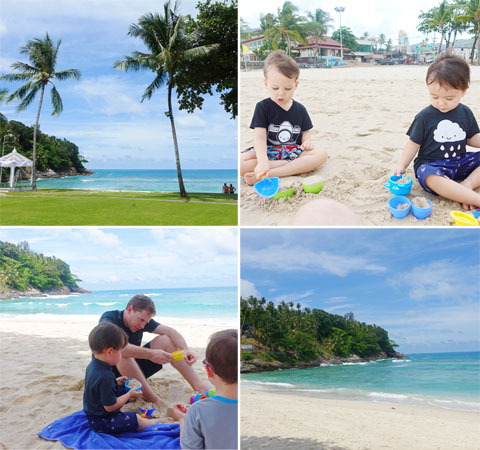 The not so good thing about staying in the Patong area is that, because it’s touristy, the beach isn’t as lovely. So we simply hopped on a tuk tuk and went to other beaches.

I HIGHLY recommend Tri-Trang Beach. It’s only about 3-4km away from Patong, and DIVINE. It’s a hidden beach, so you’ll have to tell the tuk tuk driver to go to Merlin Beach Resort. Enter the resort and simply walk through to the other end, and that’s Tri-Trang Beach.

It was deserted when we were there, boasting clean white sand and clear turquoise water. Completely gorgeous! 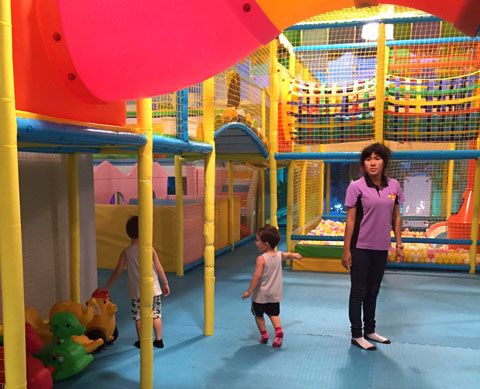 Back at the Patong area, there is a Kids Club, run by an Aussie lady. It’s only 200 baht (SG$8) an hour per kid, and we were so surprised when we stepped in. The play gym is HUUUUUGE! The largest play gym I’ve ever seen, and so clean and well kept. It’s really impressive and the kids adored it there, wanting to stay for longer than the hour.

To be honest, the kids loved this most about our entire trip 😉 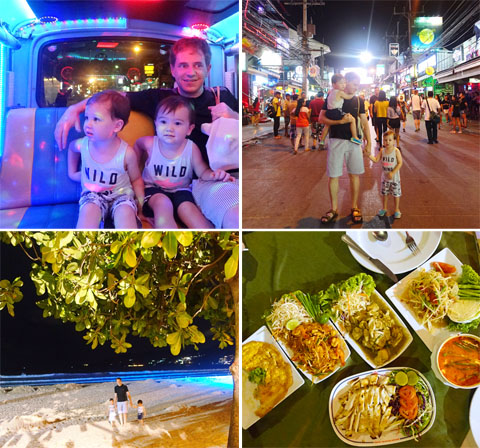 Kind of. Or at least the we did all the partying we could do with two kids in tow. The kids were especially into the “party tuk tuks”, with their flashing lights and disco music. (We requested for some nursery rhymes, but were told no, so had to make do and sing our own!)

We went up and down Bangla Street, the…. errrm…. nightlight hotspot of Phuket. Probably also known as the tourist underbelly of Phuket. The kids were pretty fascinated and, to be honest, the people were equally as fascinated with the kids. Unfortunately, they are a bit too young to fully appreciate sexy half-dressed women rushing up and cooing at them 😉 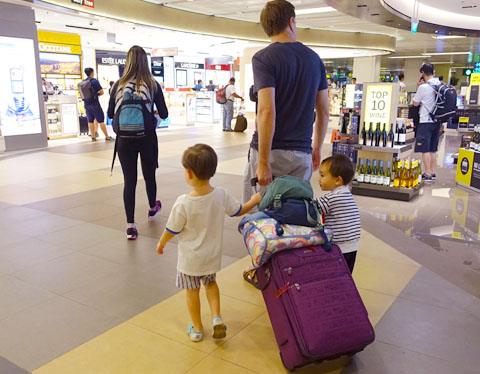 Chris got the hang of this whole single parenting thing, so I was a bit redundant on the flight home! The three boys sat in their own row, and I sat behind with the whole row to myself. When we landed, the boys just automatically went to him and held onto the trolley bag (“it’s how we got through Phuket airport”, Chris explained).

It’s good to know that, in future, Chris can easily handle both kids on a holiday! 😉

Previous How To Spend 3D2N In Genting For Families
Next SWITZERLAND: best experienced with good mates!