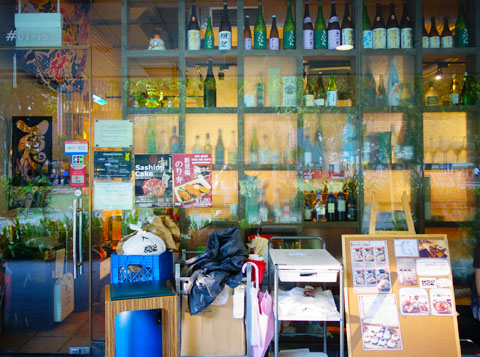 The reason that deterred me from it was the… hype. I found it all a bit silly when people were frantically trying to get their name down on the waiting list months in advance, then proceeding to brag the hell outta it once they were dining there. I generally don’t go for (or lose interest in) what the general consensus finds ‘hot’, so erased it off my Must Try list ages ago.

As it turns out, guess I was destined to check out Teppei after all, as I told my cousin I wanted to bring her out for her birthday dinner, and she found some spare seats there, so off we went! 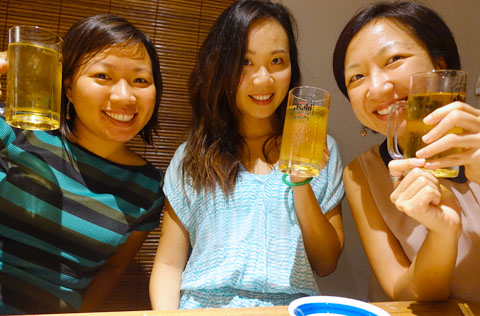 From my understanding, the omakase set at Teppei first became hugely popular because of the rock bottom prices (coupled with excellent ingredients). It used to start at $40 for the meal, which you won’t find anywhere else in Singapore.

But when we were there, the prices had obviously creeped up, and they were $60 or $80. We chose the $80 one, since we were there to celebrate my cousin’s birthday. 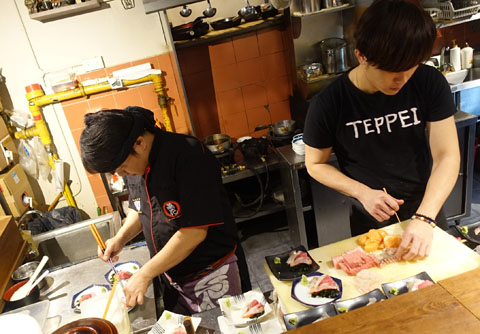 Cooking and/or prep of the food is done right in front of you, since the (tiny) restaurant is all counter seating. I like this – Chris and I always request counter tables if they exist in any restaurant – so much more fun to see the action! 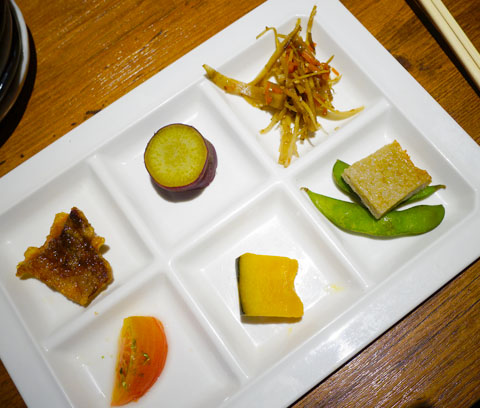 To kick things off, we were each presented a small platter with morsels in each section. There was a bit of fish, a piece of sweet potato, a sliver of marinated tomato, a bit of pumpkin, etc etc. Nothing blew me away, but it was all still pretty interesting. I like my food bento style with lots of little tid bits here and there, so this pleased me! 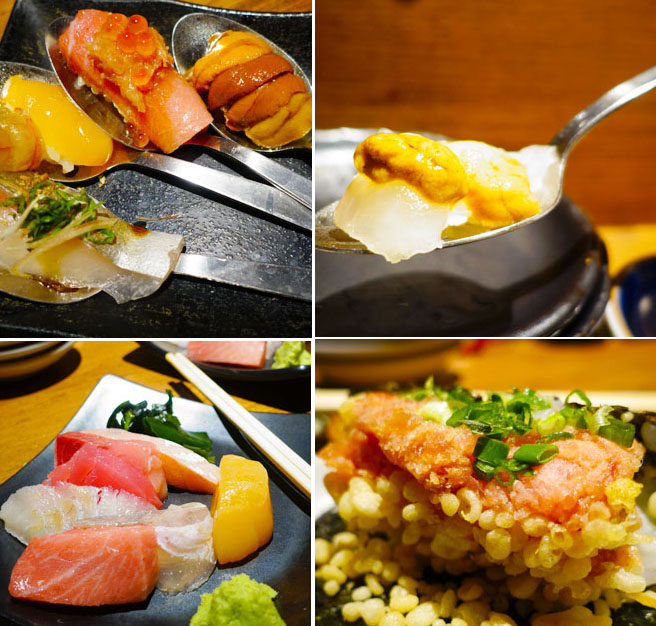 This was the storm of sashimi and sushi dishes. In my opinion, this is where Teppei stands out, and where they are OUTSTANDING.

The standard of sashimi served here was second to none! Succulent, juicy, ultra fresh, and delightful.

Pretty much everything was sheer perfection. It was also here at Teppei that I had my first taste ever of uni (raw sea urchin). I’d never eaten it before because I just find it horrible looking and incredibly scary, but I gave it a shot here and….. it’s not too bad! Nice and creamy, but I still felt a bit queasy eating it 😛

If you see the bottom-right photo, it’s basically a sushi handroll, with the freshest of crispy seaweed and the most amazing minced raw tuna ever. However, I WAS COMPLETELY SHOCKED when we looked up and saw that all the ladies had HALF the size of sushi roll, compared to the gentlemen!!!!! I was a bit aghast. Mostly because I was full but not stuffed at the end of the meal, and would have appreciated the “man serving” of sushi roll. Also because that was absolutely amazing and one of my favourite dishes of the evening 😉

And, nope, it’s not cos I’m a greedy pig. Heaps of girls eat about the same amount as I do.. so I reckon it’s only fair we are served the same size dishes as the guys… 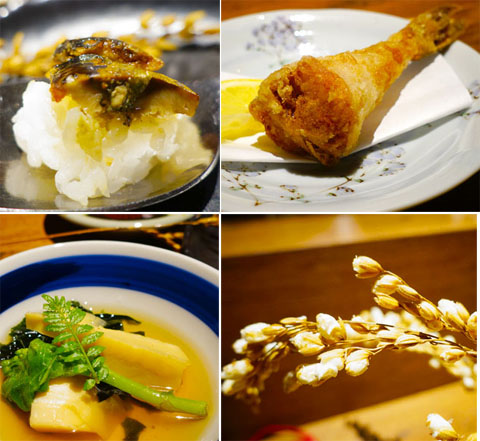 The dishes above are ranked on my food meter as “A Tad Weird”. I’m not a very adventurous eater (at least not for an Asian!), so I did find the above a bit scary.

The top two were some sort of fish sushi, but creepy looking.

The bottom-right was popped rice! It was more a novel experience than anything, as it didn’t taste like much and no one really bothered with it after the initial photo-taking wore off. 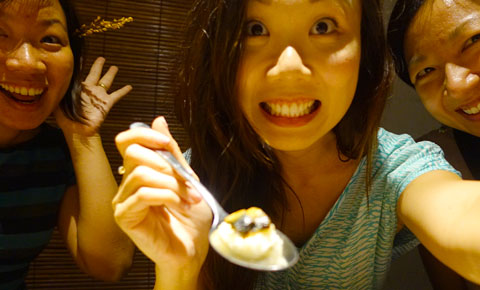 Quite impressed with myself that I dared to eat almost all the dishes! 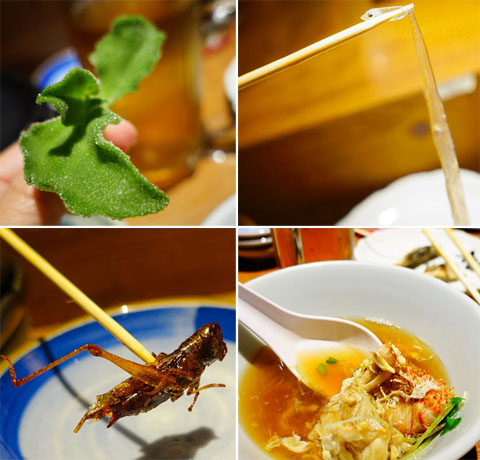 And I would classify the above assortment of dishes as “SO Incredibly Weird I Freaked Out”.

Top-left is a frozen juicy leaf with crystal ice drops on it. I don’t even know how this was dreamed up 😉 I suppose if you’re into eating lettuce, this is very similar. A juicy leaf with no taste.

Top-right is a RAW, slimy and cold…… fish. It looks like a tiny eel, or worm. It was slithery and slippery and off-the-scale in Let’s Freak Out-ness. What did it taste like? Cold, salty snot. Not that I’ve eaten snot, but I’d imagine it’d be something like that! I had to drink heaps of tea to wash it all down…. Probably would never attempt this again 😉

Bottom-left is……….. wait for it……… a whole, freaking CRICKET. I’ll admit, this made me feel queasy. But everyone was squealing so happily and munching their crickets that I kinda got carried away and ate it too! OMG!!! I have no idea what came over me. Must be the beer. Actually, it just tasted of the sticky sweet sauce they dipped it in, so at least that’s okay. But the crunch of the body parts and all the stuff inside that I don’t wanna think about was a bit much for me!

Bottom-right is a broth with crab. Yes it doesn’t sound so weird, but the crab had strange spiky hair bits all over the shell. I also have a thing about touching bones or shell, so the unidentified bits made me squeamish. Would have preferred crab meat chunks in my soup! 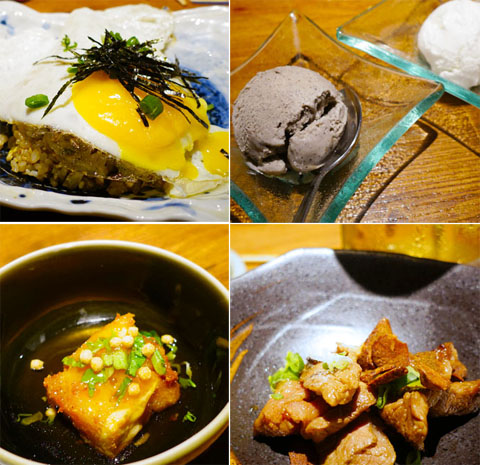 I was VERY grateful for the “Completely Non Weird” dishes that were inter-dispersed through the omakase. There was a very tasty (albeit super spicy) fried rice with a fried egg on top, a warm agedashi tofu, and incredible cubes of grilled wagyu beef (AMAZING).

And I ended my meal with Black Sesame ice cream, which was right up my alley 🙂 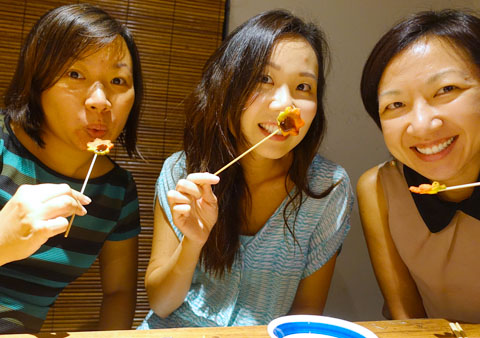 Oh wait! Another weird dish! Some sort of petal stuck on a skewer. No real discernible taste though.. 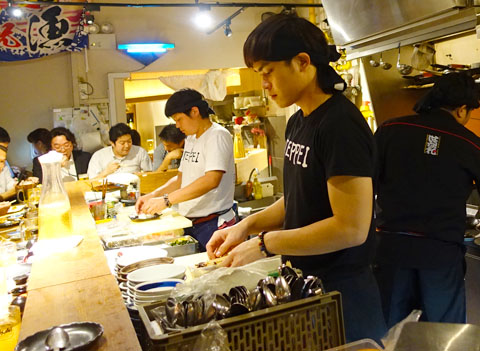 That’s Teppei himself (in white) whipping together our omakase. And also a waiter (in black) that was tall and very good looking……………… 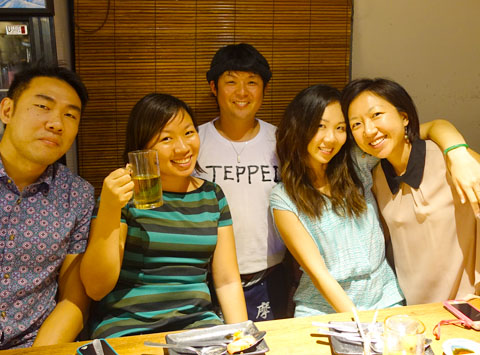 A pic of us and Teppei!

What did I think of my omakase experience at Teppei? I think that, despite the price hike, it is still a good deal for $80. What I liked was that the experience is unique – it changes day to day, and I can’t even think of any place in Singapore that has a similar experience and food. I enjoyed the cosy dining atmosphere and thought Teppei himself was friendly (and pretty funny).

However, if you’re scared off by weird food (Teppei is also famous for serving up… errrmmm…. raw cod sperm), you’ll likely be a bit shocked like myself. I still gamely tried everything – VERY PROUD OF MYSELF BIG PAT ON BACK!! – but liked just the sushi/sashimi the best.

So recently, I went to the sister restaurant Hanare, which is famous for their barachirashi (raw seafood on rice. It was utterly amazing, my favourite chirashi in Singapore. I want to go back there ASAP!

Mmmm I love uni! And we always order extra of the hand roll because it’s so good. Once I asked to change my rice dish (the one on the 4 spoons) to the chirashi but then felt really bad after because I couldn’t finish the chirashi.

Damn I wish I’d known, then I’d have asked right at the start!!