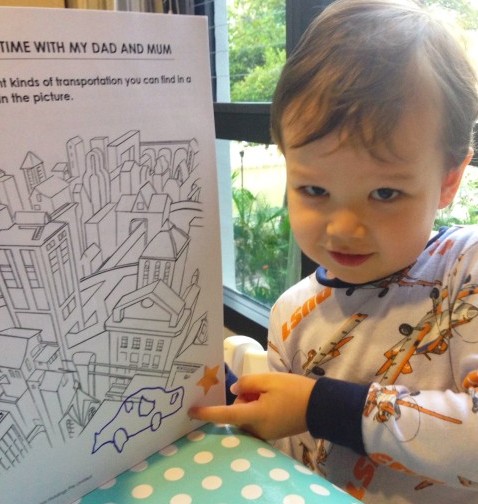 Hunter, at 3 years 11 months, drew this car freehand. He did it quietly whilst having breakfast the other day, and it freaked the hell outta me, because I have never seen him draw anything – let alone a car! OK, I exaggerate I’ve seen him draw a circle perhaps 2 times, and a smiley face 1 time. Oh and he wrote his name once, to my surprise. But that was it.

So for a long time, I was feeling a leeeeeetle nervous about his writing and drawing ability. By the time his mates were about 2 years old, most were merrily drawing, scribbling, and colouring in. Hunter had ZERO interest in wielding a pen/crayon/etc in his hand. It just wasn’t his thing.

So I was really really proud (AND RELIEVED!) when he produced this little car! I think it’s actually pretty good – pretty much on par with my own drawing ability, haha – it has two legit looking wheels and a car body, 2 windows, and 1 headlight (“because the other headlight is on the other side, you can’t see it because we are looking at the car sideways”, he patiently explained to me). 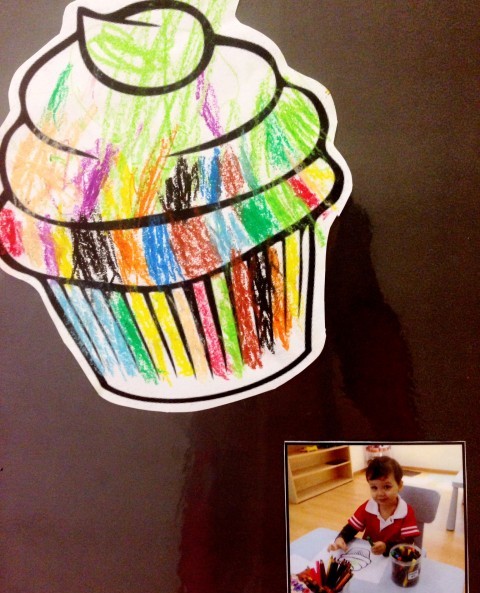 The next day, his teacher at school pulled me aside and proudly showed me this cupcake that Hunter coloured in.

You wanna know something? I have NEVER IN MY LIFE seen him colour anything in.

“Nooooo”, his teacher replied. “I promise, I didn’t even touch his hand!”

So then I was actually quite impressed! Didn’t realise he could colour in, let alone keep within the lines, let alone make it all pretty and rainbow. Haha!

It’s actually a really good lesson learned for us as parents. We agonise and worry when our kid doesn’t seem “up to par” with others… wondering why so-and-so can do this-and-that, and our kid can’t (yet). But it doesn’t really matter, because they all catch up eventually. And sometimes, they might even surprise us!

Previous POTTY TRAINED FOR REAL: NAILED IT
Next WHAT WE LEARNED ABOUT TEACHING A 3-YR-OLD HOW TO RIDE A BIKE