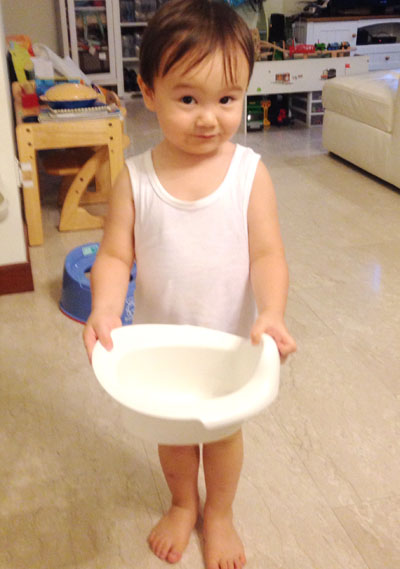 It’s one of those Things You Shouldn’t Post Photos Of but I figured, to hell with that. Because, at least Carter isn’t starkers and he has a ridiculously hilariously smarmy look on his face that makes me LOL. So I’m posting this photo!

Besides, I want to document his potty training. And my other sitting-on-the-potty and poop-in-the-potty photos seemed a lot more… TMI.

Anyhoodle, CARTER IS HALF-POTTY TRAINED! At approx 2 years 1 month old. It’s actually the weirdest, and kinda interesting, story, but I’ll start with a recap of Hunter – just for comparison’s sake (and my own reference).

Hunter was always a bit of a neat/tidy freak, even as an infant. At 10 months old, he flatly refused to poo in his diaper. So at that age, he was 100% potty trained for poo. A few days after he turned 2 years old, he decided he didn’t want to wear a diaper full stop. So we simply popped him into underwear and that was that. Was there accidents? Yep. Always from him announcing he wanted to pee, giving me a 2-3 second grace period before the flood came. In summary, Hunter’s poo-training was incredibly early (attributed entirely to his afraid-to-get-dirty personality), and his pee-training was pretty normal.

Carter, on the other hand, is totally WEIRD! When he got his potty for his 2nd birthday (a gift from a girl friend of mine), he adamantly refused to sit on it, recoiling at the thought and horror of it all. I left it at that, since I wasn’t interested in potty training him that young anyway.

But, a few weeks later, he suddenly announced he wanted to “sit on the potty. Need to wee wee”. Dismissing it as him yanking my chain, I took off his diaper and left him standing there. I was pretty surprised when he walked over, sat on the potty, and out came a pee!

He was exceedingly pleased with himself 😉

So, I decided, right there and then, to have him diaper-less at home.

And from that day on, for the past 2 months, he’s been diaper-less at home and has….. wait for it…… ZERO ACCIDENTS. I’ve never known a kid that potty trained themselves with a total of ZERO accidents, so it’s all very interesting and amazing for me! Unfortunately, I don’t quite know how it was done, nor how to replicate it…. I suppose the ol’ adage is true – a kid will potty train in their own time.

But before you think he’s pretty clever, here’s the catch (it’s a BIG one) – Carter is only potty trained when he’s bottomless.

So when he’s running around at home with…. errrr.. everything hanging out, he has a 100% accuracy rate of using the potty. No worries at all. In fact, he can also be wearing underwear/shorts and will still be able to tell us he needs to pee or poo, and wait until he’s sitting down to do it. Zero accidents still.

But once he’s outdoors….. NO CHANCE! He’ll absolutely refuse to use a big toilet or a portable potty, or even a plastic bag whipped out. Which means he wets himself.

Isn’t that annoying?!?! Like this half-assed neither here nor there potty trained kid. So for now, I’m simply popping a diaper on him whenever we go out, because I don’t want to have to deal with accidents and I’m not in a hurry for him to be fully trained. Guess I’ll try again in a few months or something.

So for now, here’s Carter. Half-potty trained and proud of it 😉 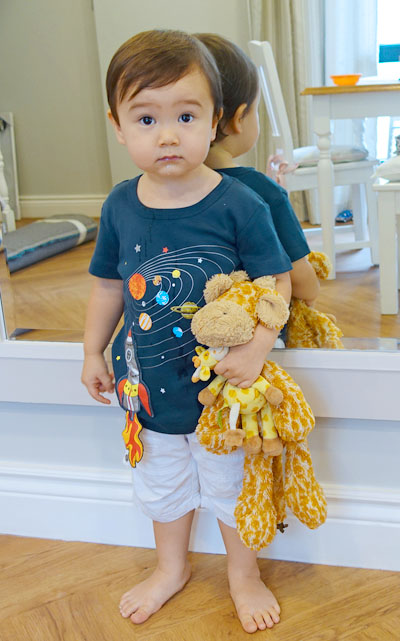 Previous A PEEK INTO THE FUTURE
Next GIVEAWAY: Win one of four sessions to paint your own pottery holiday ornament at Impressions Art Studio!