My kids loved Scitech in Perth so much that we brought them there TWICE! It was kind of the perfect place to go when it’s stinking hot (think sunburn level) outside and you just want to hide away indoors in nice cool air-conditioning.

We were totally impressed with Scitech – I thought it was better than Questacon (in Sydney) and the Science Centre (in Singapore)! It was incredibly hands on, with everything at kid-friendly height.

And it was a TON OF FUN.

There is a large play area for the toddlers. This is actually a pretty brilliant idea because the kids are kept contained in this partitioned area – we could just throw the in there, and sit on the couches to the side, keeping an eye on them! We didn’t need to hover over them to make sure they’re OK, since the area was very safe.

The boys loved the Construction zone within the toddler play area. It has ramps to go up and down, wheelbarrows to push around, super sexy construction hats (?) and big foam bricks to truck around. I think my two kids could have been in this area the entire time if I had let them! 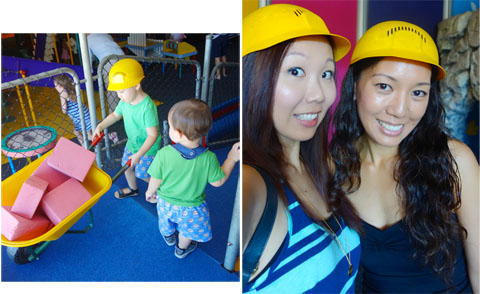 This is an aquarium with a difference. You can crawl underneath and pop out into the bubble dome! This amused Hunter to no end.. 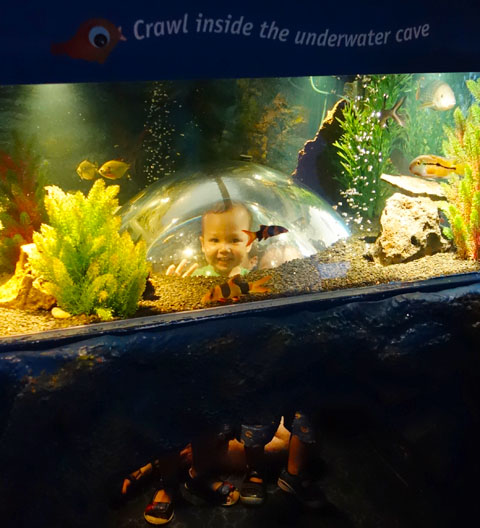 There are tons, and I mean TONS, of balls. Lots of the hands-on exhibits use balls that you can throw, swing, roll, you name it! It’s a hit with the kids. 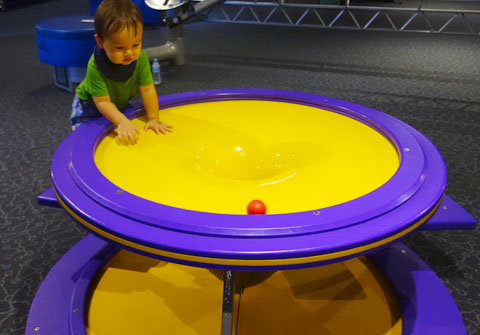 Hunter’s and my favourite exhibit! Loads of chopped up rubber bits can be pushed around to form mountains and rivers. The camera at the top pics it all up, and shines colours to what you’ve created, based on the height. Hold your hand up in the air over any area, and you’ll see “rain” come down. It’s hard to explain, and I wish I took a video of this, but it was phenomenally addictive and so much fun.

I was also thrilled that Hunter got in there and was digging away at the rubber bits. As a kid that isn’t happy when his hands get “dirty”, this was a big step forward when he touched the rubber bits and enjoyed it! 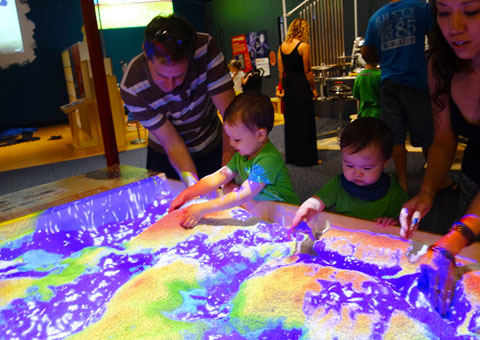 There is a Dinosaur puppet show which is a one man show, with a bit of learning and a whole lot of laughs. Best for young kids, Hunter thoroughly enjoyed it and even got some of the jokes! 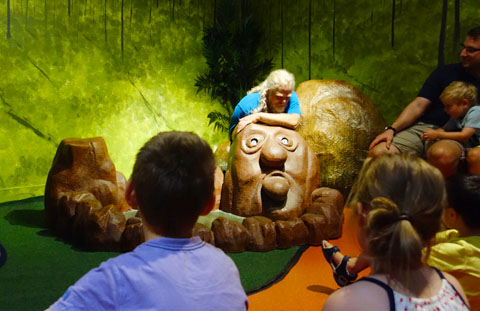 My gf and I were highly amused with this heat sensor. Evidently I have a very very hot crotch, and she possibly isn’t wearing underwear. HAHA!! 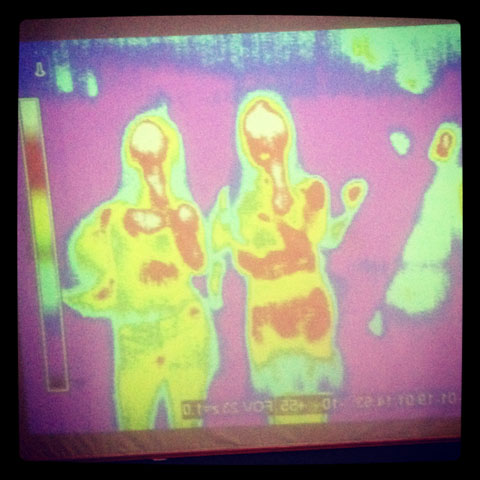 And this is the stop-motion animation we made. It was very fun (but exhausting) to make, but the kids had fun clowning around with us 😉

Both kids had just as much fun when my parents took them back two days later. Possibly even more fun, because they knew exactly where to go! I’d sign up for a membership for sure if this existed in Singapore.

In my opinion, Scitech appeals best to kids 2-10 years old. And possibly also the kids at heart 😉