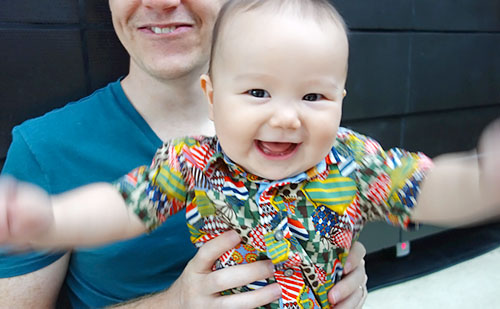 Good grief, Sunshine Bear (aka Carter) in his 7th-to-8th month is active! I’m not sure if he’s more or less active than the average kid, but he is BY FAR crazier than Hunter… who was (and largely still is) the most docile kid I know. I’m so surprised at how both our children can have such different personalities.

Incredibly, Carter is almost exactly 1/4 my weight. He’s a baby wombat. He’s on the 100th percentile for weight and also on the upper end for height. I’m not worried this time round though, as Hunter was exactly the same pre-walking days, and look at him now – a skinny lil thing at 2 years old.

Now that Carter can commando-crawl, he Can’t. Stop. Moving. Unfortunately, this also leads to lots of fiascos, like falling off the bed (oops) and constantly getting himself wedged under the TV cabinet or coffee table.

He’s still not as super-smiley with strangers as he was before, but at least he doesn’t dish out the DEATHSTARES.

He’s generally very easy going when it comes to going out, and is happy to sit in his stroller by himself with little/no attention.. since Hunter commands our attention all the time. I guess this is what second-born children learn to deal with.

His only pet hate is when we step out of sight. Screams like a banshee in protest!!! He’s actually very melodramatic about anything he gets upset about (generally if he’s hungry, or tired). The banshee screams make shopkeepers run out of their shops to see what happened, and I’ve had randoms ask me if he fell, or I hurt him, or something. I have never met a baby that gets quite so angry, so quickly, and so loudly!

His non-stop talking/babbling kind of gives me a headache, because it’s LOUD and, well, non-stop! He can go on and on and on, especially in the car. Just babbling about nothing in particular, only to get attention or something.

The two boys are such good mates. I think Hunter is one of Carter’s favourite people in the world – the big sloppy grins and excited arm flaps are just so adorable to see when he spots Hunter! Hunter hasn’t shown much jealousy since Carter’s birth, I guess it’s because he was so young then he doesn’t know life any differently! But he does express frustration from time to time.. which comes out in him pretending he’s going in for a kiss with Carter, but gives him a swift and sneaky bite instead! Gah.

Happy 8 months, my baby wombat! Your “I love mummy” special smiles melt my heart.. usually performed straight after a screaming episode when I just wanna wring your neck 😉 You are just so fat and round and squishy and squashy and cuddly!!! I could eat you all up.

Compare with Hunter at Month 7-8 here.

Previous HI, HUNTER
Next WHAT A SHOW PONY