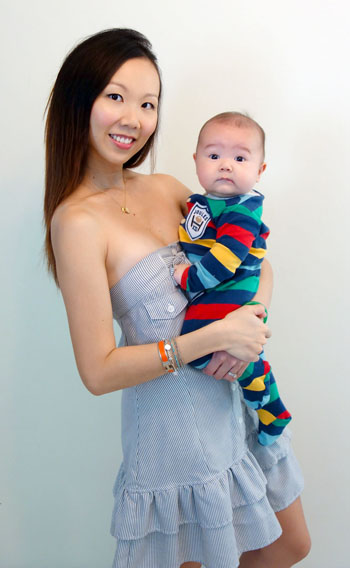 My darling boy is a bonafide baby now, and no longer a helpless newborn that’s oblivious to the world. Carter is just EAGER to be part of everything – to be in the middle of any social situation, to have everyone’s attention on him, and oh boy the envious/lustful look he throws in Hunter’s direction when Hunter is playing with toys! My little one just wants to grow up, fast. His yearning to scramble and run around with Hunter is obvious in his eyes and actions, and he just gets so frustrated that he’s stuck in this baby body that can’t yet walk 😛

Then again, he’s really not so little. He’s almost 10KG now. To put this in perspective, Hunter is only about 1KG heavier. They basically look about the same size, side-by-side 😉 Carter is now bigger than any other baby I know, and is rather difficult for me to carry around now. I’m much less worried about his weight this time round though, as Hunter was gigantic as a baby and now he’s a skinny thing. They do lengthen and slim down once they reach toddler-hood!

And, on the plus side… Carter is so fab at sucking out all my calories that I’ve reached my goal weight, which was to be 1KG lighter than I was pre-pregnancy! It did take me 4 months to get to it (since I haven’t exactly been dieting or exercising), but better late than never, right? 😛

Sir Laughs-A-Lot absolutely DEMANDS our attention, and will pointedly track us with his eyes. If I step out of sight, he emits this horrific scream. It makes it almost impossible for me to step away from him, not easy when I have Hunter wanting me to play with him. So I’m now thinking we need to invest in some sort of bouncer/exersaucer/etc to keep him upright and playing with toys and being able to see me when I’m puttering around at home..

Compare with Hunter at Month 3-4 here.

Goodness he’s sooooooo bloody cute, my eggs are doing swirls ahahaha. When they get older I’ll send you my daughter number 🙂

Isy’s been there since dec cos I told them he was turning two in dec. :=

You are so blessed that both of them are such good sleepers and such cuties!!!! 🙂

See Hunter at Toddlers club next week! I am so sure he’ll enjoy it! Isaiah can ease him in! 😉

Well.. they’re only cute when they’re not having a tantrum or screaming, heh!!

How long has Isy been in Toddlers club? we forgot to put Hunter in it last week lol.

Cutie pie! He is huge 🙂 and lucky you, reaching your goal weight so quickly…

As for exersaucer, it’ll probably work from month 4 to 6. Christian is 8.5 and has started making noise when I put him into it as he prefers crawling or cruising.

Ohhh thanks for the tip! It’s a good point, probably best to borrow or rent one, huh