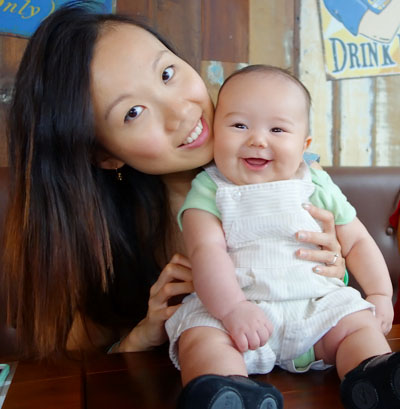 Oh how I love my littlest man!!! I’m so tickled that I have a SMILEY child. I’ll be frank, Hunter wasn’t a very smiley or social baby… he was to Chris and I, but to no one else. It would be a huuuuge effort just to get him to crack a smile, and Hunter was completly (in)famous for his DEATHSTARE. He no longer deathstares (as much) fortunately but for the longest time, he was quite a serious child.

But Carter! Oh my! He’s just a fat bundle of smiles! I love it 🙂 All he needs is someone to look at him, and he’ll break out in a cheery grin. Chris reckons it means his smiles come a little cheap (LOL) but it’s nice having a kid that laughs so easily.

Carter’s special smile, though, is JUST FOR ME. It’s this wide-eyed, I just adore you kinda look that makes my heart go all fluttery and weak and mushy. He has a special look and smile for me that he gives to nobody else, not even to his Dad. He absolutely adores me, his whole world revolves around me, and he wants nobody but me. And it’s obvious to everyone that sees him. It makes me feel so loved and so special, because I never got that with Hunter.. who, to this day, prefers Chris and my Dad over me (unless he’s sick or upset, then it’s “Mamaaaaa”).

Baby giggles. Oh how they make my heart melt!
httpv://youtu.be/7nkpzJP6nnU

Carter has a real feisty streak though. If he’s unhappy about something…. the scream he emits is window-shattering. It blasts our ear drums, makes people reel, and has everyone turning around to stare and wonder WHO’S TRYING TO THROTTLE A BABY??? He is a Drama King. It’s awful too cos he won’t stop until the particular need is met, driving everyone insane in the meantime 🙁 🙁 🙁

He’s also pretty… heavy. He was already 8KG a few weeks ago and just keeps getting fatter?? But he’s on 100% breastmilk so nothing we can do.

Hunter will proactively go up and cuddle/kiss Carter, which is infinitely sweet. Carter will follow Hunter with his eyes endlessly, he absolutely adores his older brother. Can’t wait til both of them can run around and play together!

Carter is a real social creature – he thrives on going out, and having human interaction and attention. He’s also really vocal, and will have endless ‘conversations’ chattering away with me. He’s actually pretty noisy!

My girl friend summed Carter up best – “he’d be the easiest baby in the world, IF he were your first born”. That describes Carter so eloquently because he is a perfect, smiley, placid baby that behaves, sleeps well and eats well……. provided he gets all my attention. However, that isn’t always the case, since Hunter demands a lot of my attention and energy, and so Carter really becomes a monster when he fights for attention. Dr Jekyll and Mr Hyde…..

Compare with Hunter at Month 3-4 here.

Previous ‘CAT’ SHOW AND NOTTOOBIG STORE @ FORUM
Next MY 3 BOYS

Your Carter is SUPER adorable!!!!! Love his looks… I go aaawwwwwww every time you post his pics… I saw you with Erica once at Plaza Sing, but didn’t dare say hi… Chuckles. I really love to see your kids growing up and do hope to follow your blog till they get married… **Big grins**

That’s so nice of you Sash, thank you! I don’t think Erica have been to Plaza Sing.. at least not for months and months??

What a lovely smiley boy. He really is a chunky monkey, isn’t he?

That photo of Carter laughing with Hunter leaning over him is just adorable.

That’s one of my fave pics of them too 🙂

Aww thanks Mel! It makes me melt 🙂

aww he is so cute! babies are irresistible
wished i’d the chance to carry him 😛

You can next time!

i can?!! yay 🙂 that would totally make my day. hope i’ll bump into you soon then!

I was just think I shld post an update in G when you did this and I thought, it’s almost exactly what I would have written for G (not so eloquently though).
I think carter and my G can fight for chunkiest bub – he was 9.2kg at just past 5mo.

Hehe so funny that both our boys are similar! It’s hard when they scream tho.. esp since we have older kids that demand attention too. sigh

He is absolutely adorable! I wish my lil one is as compliant as Carter, I’m def finding it very tough at the mo being a first time parent and a difficult newborn. My LO also gives death stares like ur Hunter! We were trying to figure out what to call his frowns when he stares at ppl n when I read this entry I though omg it’s a death stare!!

Awwww Sebastien is so wee and adorable!! Congratulations 🙂

And LOL at him also having a death stare. Hunter was absolutely infamous among family & friends for giving the nasty look, even when people leaned in and cooed at him (so embarrassing).

I wouldn’t call Carter compliant, that was more like Hunter! Carter is super smiley but oh boy he can blast your ear drums when he’s not satisfied about something (which can be often). Sigh!

Carter is so sweet! I’m amazed that he’s sleeping so solidly through the night already! Any tips?

I think both my kids are lazy and so are good at sleeping at night… haha! I reckon it helps if you follow a routine though, we have ours like clockwork at specific times, so they end up just gagging to fall asleep ASAP once the routine ends.

Also, because both kids were so chunky when they were very young, I think it also meant their bellies were physically bigger and could hold more milk to tide them through the night!