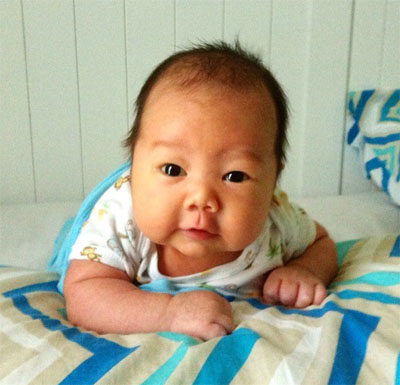 My lil chunky man has visibly grown taller and bigger. So much so that people that haven’t seen him for a week remark that he looks different. And he does – his skin is now taut and no longer wrinkly newborn skin, his eyes are wide awake and alert, and he feels solid.

Like Hunter, Carter’s weight gain is at supersonic speed. He’s about the same weight as Hunter was at this age, perhaps a bit more. But this time round, I’m not as nervous about having a chunky baby.. because I look at Hunter now and he’s all lean and nowhere near fat. So this time round, I’m actually enjoying the deliciously squishy turkey-drumstick thighs I can chomp on, the full rounded belly and the chipmunk cheeks 🙂

Carter is most definitely the opposite of Hunter in terms of, erm, sound level. He’s generally pretty well behaved and sleeps very well at night, but when he goes on his rants (generally when he wants to be held a certain way, or picked up by someone), he can shout and rant SO loudly that every single person that has heard him do this is shocked by his volume. Eep. I’ve learned that he gives me an approx 2-3 mins “grace period” of grunting around and rooting.. and once that grace period is up, he emits sounds like I’m torturing him in the worst possible way. His shouts can be so piercing that it could split your brain! And then, when he gets what he wants, he’s all smiles.. Talk about sending us on an emotional rollercoaster ride…

Hunter still cannot get enough of his baby brother. Nothing delights him more than patting, kissing and playing with Carter.. which completely melts my heart 🙂 Every morning, both boys have a cuddle with me in our big bed, and they adore each other’s company. Hunter is also always thrilled when I pop Carter into the cot with him.. he seems to love sharing his bed and favourite toys (particularly Teddy) with Carter, whereas he’d have a total breakdown if any other kid touched Teddy. But with Carter, he’ll proactively plonk Teddy on Carter, then say “thank you!’ on Carter’s behalf – LOL!!

Before I gave birth, I was feeling a bit of trepidation about Carter.. wondering how I’d be able to love another child since my entire heart belonged to Hunter. But now I feel Carter occupies my entire heart as well. How is that possible? It’s like my heart doubled in size. The feeling wasn’t as strong last month, as we were still in the haze of learning about a newborn and I had hormones rushing through my system. But this month, with everything calmed down, the surge of LOVE I feel for Carter is unbelievable.

It feels so special, the way his eyes track me around the house. How my voice never fails to make him twist his head around to try and locate me. When he gets nervous and emits little disgruntled cries if he can’t see/hear me for a few mins. The devastatingly adorable (to me!) grin after he has a good breastfeed, a special smile reserved just for me. I do think he is closer to me than Hunter was.. because with Hunter, he had the full attention of everyone. But with Carter, everyone tends to focus more on Hunter (who naturally commands more attention), so it’s just me that is with him 24/7. And because of that, the bond that Carter and I share is really strong. He’s my precious littlest baby 🙂

This upcoming month will be exciting for Carter, because it’ll be his first overseas trip… to the USA! My awesome parents are sponsoring our whole family the gift of a trip to Boston and NYC 😀 Unfortunately Chris won’t be able to go because of work commitments, but the two kids and I are going! It’s going to be madness, but I can’t wait 🙂

Compare with Hunter at Month 1-2 here.

A trip to the US with you and the boys? Oo all the best! I’m so glad for you that Hunter is turning out to be an awesome brother to Carter!

Im very relieved too.. i don’t think I have the brain capacity to deal with toddler jealousy 😛

We’re looking forward to the USA!

What a lovely update!!! 🙂 Awww, the part about your heart doubling is awesome! I take my hats off to you for wanting to travel with 2 kids without the hubby! Your parents are coming along I suppose? Sounds fun!

And yep, it’ll be my parents and I with the two kids…. it’s going to be madness, but we’ll have fun!

Ah, that is fantastic. Love the pictures of your 2 boys together! so glad to hear that things are going pretty smoothly with Carter. And the bit you said about your heart doubling in size is just fantastic 🙂

I guess with a second baby, stuff isn’t that new anymore so you don’t freak out as much 😉

The boys are so adorable! Hunter is an amazing big brother! Loved the pics!!