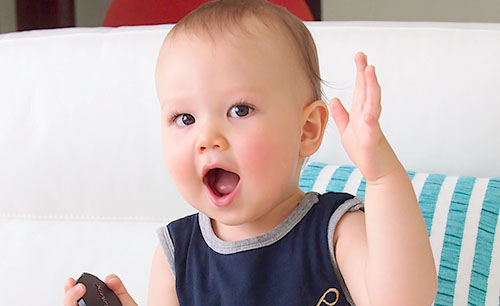 Hunter’s been super-fun the past month! Lots of smiles, lots of cuddles, and lots of proactive kisses without being asked. We’ve been going on lots of play dates together and he’s generally been treating me well, LOL. It’s tiring running after a toddler, especially whilst pregnant, but it’s so much fun being with him that it’s worth it.

To be honest, by around this age, it’s pretty hard to track a child’s progress. It’s because their Physical Milestones are largely all over and done with.. and the focus is more on the Mental Milestones. But, those really flood in and may not be as ‘obvious’ sometimes, so it’s hard to keep track and write about them.

For this reason, this may be the last month’s update on Hunter’s progress.. or if I do continue, it’ll be way shorter and maybe just a few bullet points. Moving forward, I play to focus more on stuff that Hunter and I get up to, and obviously also on #2 once he is born (not long to go now!)..

He’s good with shape-sorting (ie. fitting those blocks through their appropriate-shaped holes), and loves intricate stuff. Not a fan of stacking toys though.

He’s getting pretty good at swimming.. and can hold on with both or just one hand and kick to swim (without the use of any floaties etc). Loves going down the pool slide by himself 😛  Good at dunking his head underwater and blowing bubbles underwater.

Still going well with using his potty for poo time. But, bizzarely, won’t say “poo” and rather makes grunting noises and crouches down in a weird way, so at least we can tell he wants to poo and can whip out his potty (he’ll only poop at home).

Hunter’s top-right molars have also broken through (1-2 weeks ago), which we discovered during his 1st dentist visit this month. He was, thankfully, very well-behaved during the visit, and lay back calmly whilst the dentist poked around with a mirror inside his mouth and discovered the molars. Also had a very proud-mummy moment when the dentist gave me a big thumbs-up, because we don’t commit any of the ‘crimes’ (ie. feed lollies/chocolates/cakes, diet high in fruits/veg, little/no snacks, no added sugar/salt in cooking, doesn’t drink from teat, doesn’t drink milk to fall asleep, no drinking during the night, brushes teeth daily, etc). We’ve worked really hard on all this ‘good parenting’ stuff, and frankly, it ain’t easy, so it was nice to get a bit of a pat on the back! 😛