Hunter LEARNING TO GET ALONG 27 September 2011

My cousin madmoneymonkey’s son Elliot can be a bit shy, and is the baby of our side of the family. So it was hilarious and rather cute to see his reaction when he interacted with Hunter.

They were looking at the iPad and Hunter, being the busy body that he is, kept reaching over to try and press the screen. At first, Elliot would whack Hunter’s hand away, and we would tell him “No, Elliot, be gentle. No hitting.” After a few times, resigned to the fact that he would be reprimanded every time he hit Hunter’s hand away, he finally took to holding Hunter’s hand.

We thought it was pretty hilarious as in the photo, he looks like he’s being very sweet and holding Hunter’s hand. In reality, it was the only way he could figure out that was ‘nice’ enough and would keep Hunter at bay. LOL!

In other news, found one more food item Hunter will tolerate. Banana flavoured rusks! The regular kind gets thrown across the room angrily, but this one he will chomp on for quite a few minutes until it’s gone all soft and mushy (gross). 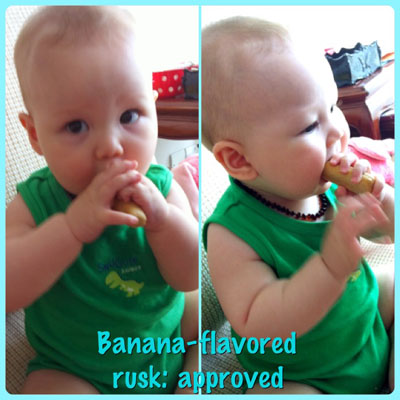 I think he’s perfected the art of it 😉 especially whenever we’re out!

hahhaha then he will be Evil Superman!

The photo with Hunter’s deathstare cracked me up big time! It’s hilarious. He’s just so adorable, smiling or not 🙂

.. Not very sociable or friendly of him, though 😛

the death stare is adorable! 🙂

Adorable??? He was trying to be BADASS! 😉

I must say that Ellie is problem solving very well! 😉

LOL.. in the most socially acceptable way possible 😉

i LOVE his death stare!!!

Not if you’re on the receiving end… bwahaha!

Oh my! The I’ll-rip-your-fingers death stare is enough to get his message across, lol.

When did Hunter start chomping baby rusks? After introducing solids?

Only this week but it’s cos he didn’t like the ‘regular’ ones! I believe they can just start on them once they can grip one themselves..

Even i’m scared of the Hunter death stare!

Yay! He’s finally eating- i hope it keeps up. 😉

Well… he’s barely eating but thank goodness he’s still good with breast feeding, so at least not starving to death 😛

Hehe, the death stare is so funny!

He does it frequently lol.

If looks could kill…!

And yay to Hunter accepting another type of food 🙂 How does he deal with actual bananas?

He hasn’t had bananas cos the pediatrician told us to hold off on it (due to his constipation), booo

Yay to banana-flavoured rusks! My son loves that too 🙂

It’s thanks to your recommendation actually!! Cos remember how you mentioned yours liked it when we went out last week 😛 So thanks 🙂

He’s rather perfected the art of it 😉